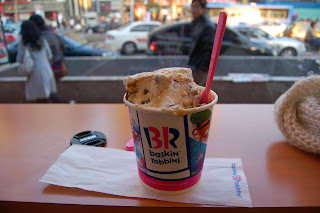 Yesterday I had coffee with a Chinese male friend and as usual we started talking about dating and love in China (I can't help myself from asking him about the standards over here.. I just find it so interesting/different to where I come from). I asked him where he'd take a girl for a date and he instantly replied:

Now, for those of you who do not know: Häagen-Dazs is probably the most high profile luxury ice cream brand in China. It's mad, I know, as I have munched on much better scoops at both Ben & Jerry's and Baskin-Robbins, but for some reason, Häagen-Dazs has earned a reputation of being the crème de la crème of ice cream here in China (well, price wise I believe it is).

Häagen-Dazs is especilly loved by China’s urban elite and middle classes who turn a casual trip to an ice cream bar into a family event for Sunday afternoons. I have been to a Häagen-Dazs once in Shanghai, and I was actually a bit appalled. When I've visited Häagen-Dazs before in places like Indonesia (I spent a summer on Bali in 2002 and became a Häagen-Dazs regular) it has been a nice, but casual place where u get good ice cream. In China, however, it's like... an upmarket ice cream restaurant?! They have tables with pink chairs and waiters that are passing around expensive-looking menus before taking your order... And the ice cream? Well, except for the traditional scoops, u can choose from actual 'ice cream meals' that cost way more than a regular meal at a Chinese restaurant. We are talking about 100 kuai for a sweets here... what happened to the Chinese 'let's not splurge' attitude?!

During my one (and only) visit I watched parents with their little princess/prince children eating away, painting an image almost identical to the scary commercial photos of 'one happy Häagen-Dazs family.' Well, maybe it's actually considered to be a real 'happy pill' over here, because according to my Chinese friend, Häagen-Dazs isn't only the choice for spoit children and their folks, but it also scores high on a young girls list of 'dream dates.'

-Most young girls have a romantic idea of Häagen-Dazs, my friend explained. And then it's about brand image. Everybody know Häagen-Dazs... they know it is a good brand. Eating there gives you status.

(Wow. I never knew a scoop of ice cream could have so many hidden meanings!?)

When my Chinese friend asked me if a guy had ever taken me to a Häagen-Dazs ice cream bar for a date, I said no with a smirk.

Yup. I guess a ZOO would be on the very bottom of a Häagen-Dazs-loving girl's list of dream dates...

Posted by Jonna Wibelius at 8:21 AM

here's a photoblog of beijinger

I think the zoo is an excellent date destination, especially in China. It's one of those sorts of places you see with fresh eyes when you're there with someone else.

trevelyan -yeah I think the ZOO was a quite creative choice. It was back in Australia though, so I guess the whole idea was to 'show the Swedish girl some kangeroos' although I still had fun!

Zoo dates are the best dates! You totally win points with that one ;). I have seen HDs here in Beijing, but hade no idea what was behind those doors! Now I have to go once, but after that I have a feeling I will stick to my local BR and DQ.

Ha ha... Mainlanders usually copy Taiwanese. HD is an expensive brand of ice cream in Taiwan. Mainlanders are still learning, experiencing with their newly found economic freedom. Or so I have heard.

hahaha
I had zoo dates before. I thought it was pretty good choice and girls agree...something to do with their love of cute animals :p

m-e -agree! I also looooove Cold Stone. Unfortunately they just opened a shop opposite our flat... danger danger!!! I suck when it comes to resisiting temptation.

Pingu& Sarah -yup, ZOO dates rock. Although when he pulled out a video camera that he'd brought just to video tape the animals for me (?!) so that I could send it back to my family in Swe I felt it went a bit over the top... (Pingu, it was the Perth ZOO... :))

Anonymouse -I believe HD is expensive everywhere?! But yeah, maybe that's is why HD is considered such a 'cool place' to visit...? Although do mainlanders in general copy Taiwanese!? Really?

You have? I loved the penguins at the front of the zoo :D

How weird.. I would have loved it if a guy took me too the zoo! But eating ice cream is usually the thing I do with my girlfriends, so it's not really something to do on a date.

HD is quite luxury here in China. At the beginning of its advertisement on the television, it implied "if you love sb, just take him/her to HD":)

I seldomly bought it in European countries, although it is cheaper and sold in the supermarket. But I go to HD often with friends once I get gift coupon. Coupon is another interesting thing here:)