How to make people panic in less than 5 seconds 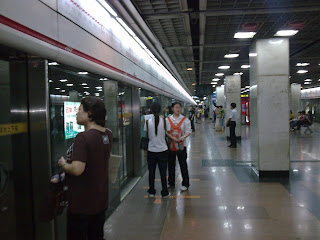 Yesterday in Shanghai I was about the catch the metro from Huangpi Nan Lu just before the rush hour (so around 5pm). I was (as usual) in my own little la-la-land, listening to my ipod and thinking about what I was going to have for dinner, when the metro came and the doors didn't open. Actually, I probably wouldn't have noticed it unless it was for the fact that people started screaming so loud that I could hear them even though I had headphones in my ears. I then looked around and got to witness something quite hilarious. Since some doors to the metro (including all of those in the front of the platform, where I was standing) weren't opening, people on the platform were panicking and running around to find another open door where they could enter from. This didn't happen in silence, oh no, people were screaming and shouting to make sure all their near and dear ones got into the same metro carriage. Same thing happened inside the metro where people were almost hitting others in order to get to another door.

I just stood and stared (it was actually a bit entertaining) as I wasn't keen to rush to another door and get inside an already over-crammed metro. I simply decided to wait for the next metro. People inside the metro, however, didn't think I realised what was happening around me and started to point and scream to me to head to another door. Ahhh.. it might not sound like fun but I'm not kidding you -it was HILARIOUS just to stand and watch the scene! Say what u want about Chinese being rude when it comes to cutting line and pushing themselves to the front when stepping into an elevator/on a metro... but they sure are keen to help you when the think you are a lost laowai! As I didn't move from my spot the people inside the metro went from screaming to watching me with a compassionate eye, as if I had no idea of how to move on a platform. Awwww... people! I couldn't help but feeling a sting touched.
Posted by Jonna Wibelius at 8:22 AM

Yes, I have found that the Chinese women can morph into den mothers at the snap of a finger. They will usher you around, make sure you know just what to do, and how to do it. Sometimes, it can be overwhelming as every task seems to be completed hastily and loudly. It would be much different than if I, being pretty laid back, would just complete the tasks myself (which I typically can do by myself contrary to their belief that I am a lost laowai:-) ).

Either way, these ladies do bring a smile to my face. They may be pushy, but their hearts are in the right place!

Oh my, I wish I'd been there. Or that you had a video camera!

I actually panicked once on a bus. It was the type where you enter at the front and exit at the rear. But I think the driver didn't see me waiting to get off the bus so he didn't open the rear doors. I panicked and ran to the front pushing past people trying to get on, fearful I'd miss the stop and have to walk miles to get back to where I wanted to get to.

Of course, the correct thing to do would have been to shout "open the door!" to the driver, but I was worried he wouldn't hear me.

Well, be certain that if you were in the same situation in 'civilised' London, people would not give a damn about you. Sometimes loud is not that bad :)

I would definitely been laughing right there with you!