Do talk to strangers 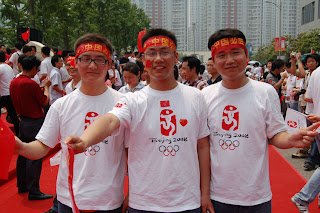 Yesterday I was talking to two students from America, one guy and one girl, who enlightened something quite new to me: young Chinese people doing their outermost to practice English. The girl told me that during a recent shopping trip to the local supermarket, two young Chinese guys had come up to her and asked if they could practice speaking English to her while she was shopping. While my mouth dropped she was like: 'yeah, happens all the time'.

Does it?! Where? When? Why hasn't it happened to me? I am often shopping alone although no one has come up to me, not even once, during my 2 years in China. Maybe I don't look friendly enough. (Note to self: smile more when out in public). Maybe my height is intimidating? Hm... strange. According to these 2 American students it apparently happens everywhere to everyone?

The guy told me about him and his friends, being out and about in Beijing. One of the guys managed to hit his head quite badly and they had to go to the hospital to sew him up. While they were sitting in the waiting lounge waiting for their friend who was being looked after by the doctors, a young Chinese guy that had seen them coming in came up to them.

Wow... there's a time and a place for everything, huh?!

All of these stories are completely new to me. But quite funny, hence why I wanted to share them.

I have to say that I am impressed by these young Chinese people's guts. I am a complete wimp when it comes to practicing my Chinese with strangers. I never start talking to someone in a shop (in Chinese) unless they talk to me first. I'm always so worried I am going to bother someone... Scandinavian upbringing I suppose ("don't intrude on your friend's personal sphere and DEFINITELY don't intrude on strangers personal sphere") Sometimes I wish I was more aggressive when it comes to these things though. The only 'strangers' I feel I can talk to as much as I want are taxi drivers. I feel that since we are both in the same car I might as well break the ice and ramble away... normally they are quite happy to chat, although the conversations are pretty much always the same.

Posted by Jonna Wibelius at 7:34 AM

This actually happens to me (sort of) quite regularly, and I'm not even in China yet.

Any time I'm up late on a Friday or Saturday night(I do have a life ;_;) I just leave Skype on "Skype Me" mode. I get random people from China calling me on a regular basis. It's great when some of them call back again. I've gotten to talk to a girl from Taiwan fairly often.

I have to talk slowly since most of them are high school or college students, but they're all very nice. I've probably helped more than one cheat on homework without knowing it too. :D

Good for the young chinese students.
It takes quite alot of courage to do so. I'm chinese, and I find that other non fluent english speakers would not normally do that. They feel intimidated because they are not fluent.
Btw i really enjoy reading your blog.

Jonna, let's have a bet.

By the time you read this comment, you will see at least one comment from a Chinese who would tell you that foreigners have misunderstood their intention, and that their intrusive action is really meant to have good intention. Chinese people never believe they are insensitive, intrusive, or forciful. You laowais just misunderstand them.

Chinese people are socially odd. Don't get me wrong. Most are nice people and I have quite a few friends. But they would apologize when it's not even their fault. Then they don't even realize it when they are being super insensitive.

I really admire these who attempt it, altough I am always too shy to do that.

But there is also a side effect, I mean, when someone do make such attempts, the conversation could easily goes to some unusual topic.

The last time two girls came up to me asking if they could practice their English, it ended in me getting scammed in the 'Teahouse scam' :(

Tripfriend -I accidently once left my skype on 'Skype me' status so I know what u mean. Gosh I felt popular!

Anonymous 2: I think u lost the bet, no?!?! ;) I bet we laowais misunderstand Chinese people quite often simply because their culture is so different. What we find insulting they find normal. Socially odd?! hm... yeah, I guess that is one way u can put it. Although obviously they must think the same of us?!

mark -well, in NZ it must be easy to talk to strangers as everyone talks to everyone.. same as in Australia. The bus driver is your buddy. Awesome.

Little tiger -Oh no!!! Hate those scams! I have fallen for the 'art student's from Beijing' scam once and ended up buying a small painting for 100 kuai.. but that was one week after first arriving in China so I use that as an excuse for being so naive... I hope u didn't lose too much money on expensive tea?!

I lost 600 kuai.
It's funny, we have a saying here in Ireland: 'A fool and his money are easily parted'
I learnt my lesson :)

I have been staying Sweden for two years and I am kind of like the country. There are more and more Swedes learning Chinese now.We just have a party in the weekend and I was impressed by some Swedes that can speak fluency mandarin.

Actually, I won't speak mandarin loudly in Sweden since some Swedes could understand. Once, when I return the books in city library, the librarian talk to me:"你是中国人吗？我的中文不是很好......" In pub and bus-station, there are also some Swedes came to me and talking with me in Chinese that they have been in China before...... Even some people's Chinese are not so good, but I do feel very happy about that.:D

Hope you will enjoy your staying in China and make some good Chinese female friends.

Are swedes so good at mandarin back home?! Whaaaat?! That's not what I want to hear?! I want to return to Scando and have the odd skill of speaking fluent mandarin.. Looks like I might have to go to Finland instead of Swe (where I think the knowledge of Mandarin is still quite low). But hey, good for u that u can speak mandarin with people on the streets! :) How's your Swedish getting along?

About Swedes being a bit hard to get to know: I know where u coming from. It's hard for Swedes to get to know Swedes in Sweden... go abroad and it's a completely different story! Over here Swedes are friends with Swedes simply because we both love meatballs... I don't know why it is like that.. maybe it has something to do with the cold climate and the fact that ppl spend a lot of time inside?!