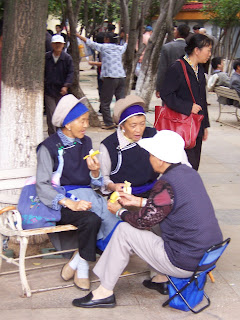 I am curious but clueless when it comes to knowing how many people are reading/following this blog. Some days I feel like there might actually be quite a few people reading my posts, while I other days wonder where everybody went. Anyways, since I often write about plans/ideas that I have, I thought that it might be time for a small update of how some things are going, or went.

Remember Little muschle guy ? Well, some weeks ago I actually bumped into him at Starbucks (He seems to live there) and he was very keen to chat. I kept talking about being 'sooooo busy' to that he would take a hike, but he didn't seem to get it. And then, he suddenly decided it was about time to ask me out. And I had to say: 'no, I have a boyfriend, just like I told you!' just so that he could go 'you do?!??! You've never told me that!??'
Well actually, that just proves that I was right about this thing. Not only does he has too much muscles for his own good, but he also doesn't listen... I have told him at least 4 times that I came here with my boyfriend, that we live there and there... yadi yadi... well I guess some people only hear what they want to hear. But any-hoo.... now when this is out of the way little muscle guy looks at me with hurt eyes. He never talks to me anymore, and barely says hello those times when we meet at the gym. It suits me just fine... I am just thinking that gosh, why is that guy so weird?! If he would have just listened to me/or my signs in the first place none of this would have happened?! But I have to say that it's quite nice to be able to go to Starbucks without being worried about bumping into him.

Something that hasn't gone so well as the above situation is my Half marathon training... I was actually doing surprisingly well until my health started to crumble this fall. Well first it was that d*** birthmark that needed to be removed (meaning: no serious running for 10 days, although I cheated and went to a Hash House run!), then, once the stitches were off I came down with a 2-week-flu... that I just got rid of... just to catch a new cold, something that happened as recent as yesterday. Since the Hangzhou marathon is already on Nov 9 I guess I am trying out a new tactic for this race, called 'rest yourself into shape.' Yup that's right folks. Resting it is. (I think we all know that I am not going to make my challenge anyways...)

As for Rocky, alias the Hunan boy, he still calls me You La and we are still good friends. He's probably taught me more Chinese than I've learned at the university altogether. His brother is also a really nice guy, which has made me think that people from Hunan in general are really cool. (seeing that I base this statement on the 2 Hunan people I know, you might not want to take it too seriously....) One thing is for sure, thought, and that is that they have the cutest dialect -often pronouncing 'N' as 'L' when they speak. ("How about some 'nui lai' -milk- with that coffee?")

Oh, and finally.... the nasty bully grammar teacher that I eventually escaped from by swapping class, is now my essay writing teacher. She still really dislikes me, anyone can tell, but I only have to deal with it once/week rather than 4/week so it's OK. Yesterday she made a remark about 'Ou Mei ren' (= people from Europe and USA) are 'sooooo tall' so maybe that's the problem. She's jealous of my height? (although she's pretty tall herself I have to say). Anyways, I really don't know what her problem is, and I am not too keen to find out, unless I unexpectedly fail my essay writing class this semester. I have to say I am so happy about swapping class though. My new class is a pure treat compared to the old one, student and teacher wise.

Hm... anything else? I can't think of anything now, but let me know if there's something more I've written about that I should follow up... I have to go and drink some more tea (to cure this cold.. grrrr) and then head off to school. I love the fact that it's Friday today. Makes a heavy head feel a bit lighter.
Posted by Jonna Wibelius at 7:39 AM

Is it possible to get a counter for page visits added to blogger?

ps: With regards to Chinese people not asking you to practise English with you, I'd try dropping that mean scowl you always have ;p

pps: the above is a joke, in case you really do have a scowl on your face atm.

Hi Adrian. It is. Try statcounter. It's a bit hard to monitor visitors however because of proxy servers/firewalls etc... I don't know how 'correct' that stats are...

About the Eng... yesterday I was in a shop and started talking to the Chi girl behind the counter... Then she actually told me she was looking for someone to practice her Eng with... I guess that was an indirect question that I actually didn't reply to... I blame it on my cold.

Personally, I have your blog on my Google reader (along with about 40 other blogs), so every time a new post happens I get notified and can read it in the program(so my hits probably don't appear on your stats.) But - I really enjoy your style of writing and storytelling! The conversations are usually hilarious. Keep it coming!

Hi Jonna,
Out of curiosity, I know you have a boyfriend. Let say you don't, would you ever date a Asian man, including the language barrier and all?
The reason i ask, cuz i see alot of "Ou Mei ren" men dating asian girls.
Sometimes it puzzles me how they actually communicate. Not only do they have a language barrier, and culture differences. And the types they are attracted to are not exactly universal appealing (not trying to be rude here).I grew up in the states, and I don't think i can be attracted to a china man.

m--e -u just made my day with your nice comment :) Thanks for that!!

anonymous: if I was single, would I consider dating a 'china man' or not... yeah, hm.. that is a big, and tricky question. I don't think I can answer it just like that. I mean, for starters: would a china man be willing to date me?! I am normally one head taller than them, and I love to wear heels... Also, from what I have heard, dong-bei men (men from north-earstern China) expect their wives to do all the house cores, something that wouldn't go down with my Scandinavian 'men and women are equal' upbringing... I could never just serve a man gaaaah, I'd go insane... Also, would a China man be able to handle my temper?! My mood swings? Or more importanly: my independence? I think he'd be a very patient china man then :)

Actually, I think this is a really interesting topic.. I think I'll write a post about this next week instead of writing all over my comment's field... stay tuned!!!

(But to answer you now: I think the culture gap between a Chinese person who hasn't been exposed to western culture and a western person who hasn't been exposed to the Chinese culture is quite huge... And I can imagine a couple with this background will have difficulties dating! I have lived in China for 2 years (+ 2 months) and I still feel that I don't understand half of everything going on around me.)

Jen -I used to do bellydancing when I lived in Shanghai... in Suzhou I tried once (at the gym) but the class wasn't that good, it was belly dancing to techno music?! Yup.. I don't think so. I'd love to do start dancing again as I really miss it, and still think it's so much fun! But where?! Not that many options in Suzhou. I miss my old belly dancing club Yarose from Shanghai!

Hunan people are nice, some of the girls there are very different from most Chinese girls in other provinces. They are known as '辣妹子'. Basically it refers to their fiery and frank personalities presumably due to the large amount of spicy food they eat.
They are generally really nice girls but can be a bit intimidating at times as they are a bit in your face. So scary to work with!!
I'm sure if you asked your Hunan gym buddies they would be able to elaborate.

You should never be worried about your viewership! I think there are more people that comment on your blog than there are that visit mine :). Plus, you are still the #1 hottest blog on ChinaBlogList. And a well deserved title if I may say so. Your blog remains the only one I have become hooked on, and beleive me I've been looking for others!

Sorry if your head is feeling a bit swollen at the moment ;).

Little tiger -how funny that you just mentioned the '辣妹子'. Just yesterday we discussed this in class... :) (see my latest post)

I find your blog entertaining and on the cute side most of the time. Can't you get a traffic report on your blog? You need to work on some more serious topics. I don't mean politics. In fact, stay away from China's politics. It's useless talking about it at this time in history. Dig deep into Chinese culture. You have some excellent observations of China and Chinese people, but I would say you should go a little deeper discussing why they do what they do when Westerners don't do that way. This is a global era where cultural differences can be understood and people can learn from each other to enhance their global understanding. Ch

Anonymous: I don't really understand.. u think my blog is 'simply cute' and therefore u think I should dig deeper into things?! Why? Why can't this blog simply be? There are soooooo maaaaany bloooooogs already 'digging deeper into China,' analysing China and everything around China, so what is wrong with not doing it?!

Seeing that I am no China expert, but simply a lao wai in China, sharing my experiences via this blog, I wouldn't really feel comfortable making deep conclusions of the things I see/hear/experience over here... I am rather hoping to provide a personal insight of 'my, personal China.' Then people can choose themselves if they find that cute, shallow or interesting to read about. From judging of the comments/emails I get 99% of my readers enjoy reading about my experiences, especially my interactions with Chinese people.

I would never change how I write simply because someone percieve my posts as 'cute.' There are looooads of deeper and more analytical blogs about China that u can read if you are looking for something more serious. Writing this blog is not my job, but more like a hobby. I write about things that upset me, about things that interest me, about things I see, hear, do... I wouldn't dream of having it any other way!