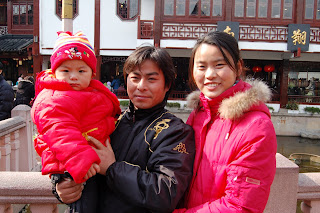 I’d say about 99% of my Chinese friends have the same idea/goal of life:

Get married
Buy a house
Buy a car
Have a baby.

(Sometimes people buy the house and the car before marriage.)

Only ONE of my friends feels that this ‘house-car-marriage-baby’ life isn’t for her. She says she wants to travel the world before buying property and settling down (sounds familiar? I could have said that myself!) as she feels those things are quite serious, and that you shouldn’t rush into them. Sadly, I think that although her mind tells her one thing, she will end up doing like everyone else. Being pushed to settle down by her parents is only one of the reasons. Not finding a guy who wants to live her dream is another.

Yesterday I had dinner with a friend who is half-way though her ‘settling down process.’ She has the guy, the wedding date is set, and the house is bought. She wants to wait for a bit with getting pregnant and none of them feels that they need a car, but except for that, she’s following the trend.

I happen to know that her salary is something like 2500-3000 kuai/month, and that her boyfriend is still at the university doing a Master’s program, so I couldn’t help but wonder:

-How can you afford a house?!
-My parents and his parents bought it for us.

Ahhhhh… of course. I had forgotten. (Well actually, the parents and in-laws didn’t pay for the whole house, but just the deposit. The rest was a loan from the bank). I’m something in between amazed and fascinated about the fact that the parents spend all their lives saving money for their kid, so that they eventually can get them a house. My thought goes out to my Hunan friend Rocky… whose parents are farmers. He has the same idea (house-baby-car) but how is he going to do it? I have to remember to ask him.

Yesterday in class we were discussing this ‘mindset’ of young Chinese. We talked about what we found important in our partners and in life, and were asked to tell about what kind of guy/girl we were looking to settle down with. When everybody had shared their deep thoughts of what they were looking for (young guys: “I want something hot and steamy”, older guys: “I don’t care how she looks it’s all about how we get along” young girls: “He must make a lot of money” older girls: “Money isn’t that important, the main thing is that we have fun together and that he is a stable person”, ‘tai tais’ (housewives, in my class only South Koreans): “I rarely see my husbands these days, he’s always working, travelling or having business dinners. But I am happy he can support our family”), our teacher introduced us to a fairly new, but highly popular concept amongst young Chinese girls. They want to find a guy with:

-A big house/flat
-An expensive, preferably luxury brand, car
-A high position at work so that he makes a fat salary, and:
-dead parents.

-Dead parents?! We all cried.
-Yeah, said our teacher. Many young girls think it’s a hassle to support their in-laws and think it is easier to have a nice life with the guy if they are already dead. Also, then they have probably left him some money.

Appalled, I decided to ask my Chinese friend (who’s from Yunnan) if this is true.
-Sure, she said. But this is a very specific type of girl looking for this situation (she actually said it’s typical for ‘Shanghai girls’ –is this true?). I’d never say something like this, and neither would my friends.
-Good… because it’s kind of… awful!
-I know. But you know. To many young Chinese people, money is the most important thing.

Weird to think that only 10-15 or so years ago, people who had a lot of money in China tried to hide it to others, by replacing ‘Armani’ buttons on their suits with normal buttons, removing high-end labels from their clothes and driving low-key cars… The young generation is so completely different!
Posted by Jonna Wibelius at 7:09 AM

Sad but true. It's all about money nowdays...
Capitalism has taken hold of your souls...not that it's all bad, but in moderation and without the 'side-effects' would be great

I think things like this go in cycles. One generation is formal/strict/low maintainence. They're children rebel and become the high maintanence/flashy/outgoing generation. Then their kids think their parents are too immature, and so they end up more like their grandparents.

Sometimes it may take a couple generations or so, but I really think it goes in cycles. My theory needs a bit more work. But meh.

Another great observation! I am going to sit back and read other people's comments. There are going to be some good comments on this topic.

Interesting post...i think the Chinese buying a house actually symbolizes that they have a stable home and status. Not having a home according to Chinese is a shame.

Yes ShangHai girls do have this reputation.

Tripfriend -hm.. u think our generation is going to look at us and not wanna spend like us? Hm... Interesting theory, but I think ppl are going to continue spending as long as they can... If there would be a food crisis things might change, however.

Anonymous: Yeah, my friend told me something similar. She said that if they didn't buy a house it would be like throwing money in the sea (= renting) and that u need a house in order to feel stable in society.

i think the chinese tradition always focuses on the value of family. A stable family is considered to be the FIRST step of a man's adult life. Yes most chinese men would follow this marriage-house-car-baby procedure, but after that they will more focus on their career, it dosent mean that they will end up only as a father.. The traditional chinese culture emphasizes on men's responsibility towards his family (which can be huge with hundreds of ppl) and the society, one famouse motto followed by generations of chinese men is "正心、修身、齐家、治国、平天下" (correct the heart, educate urself, lead the family, contribute to the country, harmonize the universe), so chinese men are always educated and pushed to settle down early and take on their resonsibilities as the leader/supporter of the family and a contributive member of the society. Jonna, ur observation is one reflection of this long tradition.

In my opinion the reason behind this tradition is that china was always an isolated country with high population intensity, this theory did helped the stability and the operation of the country. However it also made the chinese less adventurouse and aggressive, especially when met with the west.

i think nowadays gradually more and more young ppl will prefer to settle down late, just like ppl in Hongkong and Taiwan do.

As for the commments towards Shanghai girls, i think there are gold diggers in every country.

I agree with what Zhou said. Chinese people value stability in life very much, that makes sense. Of course, such deadlines give people some pressure. For example, some people do not have enough of time to check the quality of their relationship before they rush into marriage. I respect different choices. Personally, I would like to settle down my personal life as soon as possible, then both can experience and establish a good and rich (not mean money) life together.

OMG this mentality is true. I think it goes for all Chinese men, no matter where they live. I've been married to my Western Chinese-Canadian husband for 5 years now. We have the house. We own two cars. His parents are looking at us for grandkids. He is staring at me for kids.

I just stare back. I am almost 37 years old. I think this is the biggest personal/cultural divide I have ever had.