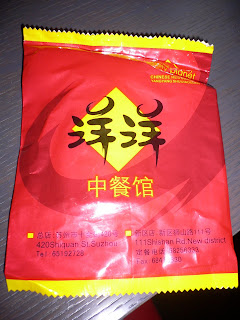 Meanwhile relying on a Lonely Planet while travelling is a comfortable and popular choice, owning an enterprise that has been listed in the Lonely Planet is like hitting the jackpot.

I am not a Lonely Planet girl, so I don't use one. But I have managed to visit 2 Lonely-Planet-listed restaurants in China (one in Shanghai and one in Suzhou) and I find it somewhere hilarious that during my visit to those restos, I've been surrounded by foreigners who's been holding on tight to their travelling guide (or, as some people prefer to be discrete, they simply let is stay in their bag but u can see them secretly flicking the pages when it's time to order food...).

The Lonely Planet listed Shanghai resto is called Di Shui Dong. I bet some of your are nodding your heads at this name, as I wonder if there are any foreigner who are living/have visited Shanghai who have NOT been to this place?! This Hunan restaurant is packed every single night of the week, and seeing that they have so many Lonely-Planet-travellers dropping in throughout the days, they don't even close between lunch and dinner, like most other Chinese restaurants in Shanghai. The first time I visited this place, in 2007, their menu was old and the food was quite cheap. Now, however, they have a bright and colourful 'picture-of-all-the-different-dishes-menu' (so that you simply can point your way to a good meal, no need to even open your mouth and speak), as well as higher prices. Oh, and they have also become one of the restaurants that Sherpa (Shanghai's dearest food delivery company) delivers from, adding to their popularity. I haven't been there for a while now, but last time I went (maybe 6 months ago?) it seemed that people at every second table were munching on the restaurant's famous pork ribs.

In my own, humble opinion; I think the food there is OK, but far from outstanding. Some stuff is delisiously spicy, but in terms of Hunan dishes, Di Shui Dong doesn't stand a chance compared to my fave Hunanese restaurant: Hunan Xiangcun Fengwei (168 Wulumuqi Zhong Lu, near Wuyuan Lu 乌鲁木齐中路168号, 近五原路). I also think that the bigger the hype, the worse the food/service... There are apparently a few Di Shui Dong restaurants in Shanghai, the most frequently visited one being at the Maoming Lu/Changle Lu crossing (I think this is the one listed in the LP too.. although I might be wrong so feel free to correct me). I once went to another, much smaller one, somewhere in the French concession (I think it was close to Fuxing Lu) and that was a much nicer experience. The staff was friendlier and the ribs were juicer.

Yesterday, I stumbled across yet another restaurant who've become the lucky victim of the tastebud love of some Lonely Planet writer: "Yang Yang" restaurant in Suzhou. Unlike Di Shui Dong, this restaurant has embraced its Lonely Planet Love with gusto: both the glass doors and the napkins have the famous 'Lonely Planet' logo plastered all over. As for the food, it was quite good: the dumplings were yummy, the chicken was boneless and not so oily, but the spicy beef wasn't one bit spicy. I might be wrong but I got the feeling that they have adapted their taste a little bit so that it can be more suitable to tourists... It felt a tad bit....weak in taste at time (or 'dan' 淡 as you would say in Chinese).

Again, the menu was the colourful 'point and choose' -picture version, and the visitors were... hm... maybe 80% foreigners. Amazing. Since I have never been a Lonely Planet user myself I find it quite fascinating that so many people read and follow the book's recommendations. Oh, hang on, now I am lying. When I was in Seoul my friend had a Lonely Planet that we used at times. Very helpful in terms of finding your way, but when it came to restaurants we preferred to be spontaneous and pick something along the way. Once, my friend convinced me to go to a cafe that was described by the LP as 'rustic' and who apparently served 'traditional Korean tea'. She was over the moon when we got there (although we both questioned the description 'rustic' as we found the interior way too new and shiny to earn this adjective). When it was time to order, she asked the waiter to recommend her something 'local', but he just starred at her with a blank face. Not until she fished up the Lonely Planet from her bag did a smile spread across his face.

My friend looked very disappointed and I couldn't help but snigger. I wonder how many customers like us they've served? Of course we didn't leave, but stayed for some nice (although not traditional) cups of tea.
Posted by Jonna Wibelius at 7:57 AM

When I was visiting my dad in Costa Rica, we stopped at a little resaurant in Quepos. They had a clipping from Lonely Planet about them on the wall. Luckily that was about it. There wasn't much difference between it and the other places though. The writer probably just went into that place by chance and needed somethign to write about. The food was good though. But of course a lot of the little restaurants in Costa Rica were good.

Oh yeah I shared the view. My own experience tells me guidebooks ratings are there just for reference and nothing more than that. When I am traveling, I normally will follow the locals for a much truly taste of the local food, it doesn't matter whether I fancy the taste or not, at least it's authentic. In fact most highly rated Chinese restaurants in London are serving just average food, maybe we're not the target customers at all, and they're relying on travel books to catch tourists or foreigners. I sometimes find it quite thrilling to explore restaurants on your own, with the help of your courage, local knowledge and of course the internet. Travel books are there for everybody but nobody knows you better than yourself...

Seriously, you have to wonder if these places are paying their way into those books.

Nice write up, pleasant to read. :)