What's read and has money inside? 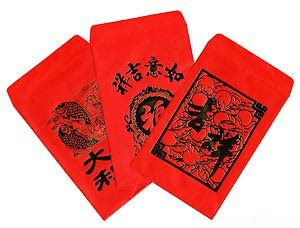 ....if not a Hong Bao. A red envelope that Chinese give to their employees/children/families during big occasions such as weddings and CNY.... Sounds all sweet and nice, doesn't it? if only it would end here. Unfortunately, it doesn't. Instead, hong baos are handed out to quite a bunch of people, if you want a favour done.

I personally received quite a few when I was working at a Shanghai magazine. What surprised me is that people weren't that sneaky about them as you would have imagined them to be: after all, it is a kind of 'bribe': I turn up for a big hotel opening, and the manager is standing there, greeting me with a smile and slipping me a red envelope, asking me in silence to write something real good about their hotel. Then, I am hushed away and the next media person comes over, is greeted, handed her envelope, and goes away. It all happened at the middle of the hotel, in front of everyone? (At one event I heard that some people from outside came in, pretended they worked for Shanghai Daily, and tried to get an envelope?! If that's true or not I don't know)

It's definitely not restricted to Chinese companies or Chinese people. A European manager once called me and asked if I wanted to come to his company's product launch party. I wasn't in the mood (and it was in Pudong... ) and I guess that came across, so he went: 'of course we have a red envelope waiting for you?!'

I personally hate those envelopes!
'Don't be silly, make a buck!' I guess some of you are thinking now. But no, sorry, I can't accept money from companies to write about them? That would go against too many of my morals and believes. Those times when I got a Hong Bao I always gave it to some homeless person, or, I put it in some charity box. Not that I know that it ended up in right hands, but at least I didn't want to use the cash (which at most times, was quite a bit... once I asked about it, and a hotel manager replied: 'well this is to cover your taxi fares!' Since when did a taxi in Shanghai cost you 400 kuai? I wasn't going from Puxi to the Pudong airport and back again?).

Obviously, handing over red envelopes is not restricted to media events. Yesterday I met with a Chinese friend who told me that her mom had found a lump in her breast about 2 years ago, and had to have her breast removed. In order to make sure that the surgeon treated the mom well, the dad gave him a hong bao with about 1000 kuai.

-You always do this? I asked.
-Of course. Otherwise he might not do his job properly! We have to give him some extra money. The hospital doesn't know.
-But what if something still would go wrong with your mom?

My friend was quiet for a short moment.

-I guess then he'd have to give the money back.

My friend agreed that this was a bad, corrupt method, but also said:
-You may think it sounds really bad, but you know, it used to be much worse in China. And also, who wouldn't pay some extra to make sure your family is safe?

Obviously I cannot argue against that... Family always comes first. Although I really wonder how a Swe doctor would have reacted if I gave him some cash in an envelope before he performed surgery? (Maybe he would have been thrilled, who knows?). Some people like to give their doctors/dentists a flower/ box of chocolate AFTER that have successfully performed some kind of difficult operation. But before? Naaaah... doesn't really make sense?

I only know of those two occasions (+ passing your driving test) of handing over red envelopes... are there any others? And what do you guys think about it?
Posted by Jonna Wibelius at 7:40 AM

another occasions,for instant,wanna get a good job in a huge company especially SOE;both the wedding and funeral sites,people give the Hongbao to show the "congradulation" and "May God bless him(her) in heaven.

I hate this too

But two parties are free to do whatever they choose too.i.e. Accept or Refuse

If one party think what was required of him is immoral, illegal or unacceptable, he can just refuse to accept the Hong Bao, which is also the norm.

Actully I think if you do not want to accept his offer, it's better to refuse the Hong Bao in the first place no matter how hard he pushes rather than give it to charity and do nothing for him. In fact, that's many Chinese usually do, either because it goes against their principles or what was required was too much. Like your friend said, if the doctor cannot do the job, he return the money.

I mean, this is in fact a contract in itself. Hong Bao for an extra action beyond normal written rules, because written rules are just inadepuate or outdated. I think that doctor case is a classic exampe of this, if doctor were allowed to a higher pay, or charge a satisfactory price, will his still take this bribe(Hong Bao)? But since they are not allowed to do so, they have to find a way out. I like to consider this Hong Bao phenomenon, aside from customs, sort of black market that addresses the problem of over regulations or public opinions(like the doctor case,both regulation and public opinion tend to consider doctor are earning too much altough the market demand and supply just cannot make it lower, but low price means higher risk;if the patient wants reduce risk, he has to pay more, but the problem is he cannot even legally pay more to this doctor, so hong bao has its way).

I have seen many Chinese refuse Hong Bao as well as accept them, even demand or return extra.

More over, I would like to see Chinese relationship fundmentally as a debt/credit relationship. The point is not to get debt/credit balanced, but to maintain it unbalanced and retain the feelings of being owed and owing, so that a closer intiamcy and higher trust can be achieved.

Hong bao in a custom sense is a mean to achieve this interpersonal intimacy--give other money, let them have a feeling of owing someone something, the giver and receiver can then gradually develop trust. I mean, if someone give others money without asking for anything, it means he trust the other side.

But, I still cannot help but saying this, it's perfectly fine if you do not accept Hong Bao, but if you accept the money but do nothing to satisfy the demand. Many Chinese would probably consider it even worse than bribe and corruption in a moraliy sense. I mean, I cheer for your decision of giving it to homeless and charity, but I really feel worried about it.

Mark -That time when I gave away my hongbaos is long gong... nowadays I don't receive any red envelopes anymore...I only got a 'study hong bao' for good exam results at Suzhou Daxue last semester, but that one I sort of felt like I deserved.. ;)
I actually never even thought about refusing accepting a hongbao?! How very stupid of me! From now on, I'll always do that. Thanks for the insight!

Emil -I think sticking to your morals are quite crucial in order to be a good business man/woman. Just because u disagree or dislike something doesn't mean you won't accept it. There are many things in China that I dislike, but still accept. What other way to do it?

Besides, I don't think me pointing out things like the food issue, or the fact that I dislike hongbaos makes me a moral police?

i hate it too,but ,我也送过红包，也接受过红包，事实上，你的这篇文章让我脸红，但我觉得你说得很好。

This is one negative aspect in Chinese society I wish to see die out. With that aside it's perfectly OK to accept it during CNY or weddings or from relatives, I think in those occasions it'll be rude to refuse it. Traditionally hongbaos suppose to have symbolic gesture of goodwill, but sadly in reality it doesn't always work like that.