Trainer at your back 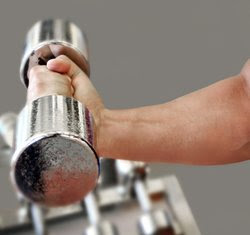 2 days ago at the gym I went to do an advanced ‘measure your fat percentage test’. It was actually quite fun, especially since I was below the average despite the fact that I haven’t trained much for the last 2 years, plus, I like to stuff myself with everything from cookies to pasta… (I have very few.. or okay, I have NO food restrictions at all...)

Anyways, the trainer who helped me do the test suggested I’d build some muscles to tone up.

"Sure," I went. Even though I hate weights. But when u have just been told that you are below average and the trainer asks you to tone up (and not down!) and your name is Jonna you will pretty much agree to do anything.

Later, I was at the free weight section (since that is the area where all the muscle men normally hang I figured it would be the best spot) working my biceps when the trainer came up to me.

-What are you training?
-My biceps?
-No you’re not.
-Oh
-You’re training your shoulders. You should do like this instead. (quickly shows me a bicep move) And, you should lift at least 10 lbs, not just 5!!
-Aha…
2 minutes later I was almost killing myself at the same spot with the much heavier weight trying to imitate the move the trainer just showed me.
-What are you doing, you are now doing a movement that trains the whole arm!
-I am? Well that makes sense coz this is veeeery hard…
-Well I told you not to do it like that, you should do like this! (quickly show me the same bicep move as before, very similar to what I was doing at that moment I have to say!)
-I think I might be too tired to lift something more right now….

Jeeez, this weight business is tough stuff. And especially when you have a trainer hanging over you. My bf laughed when I told the story. Before he used to work out at the same gym as I am now at, but he eventually changed because the personal trainers were constantly at his back, asking him to do this move, correcting him when doing that move… In the end he was so busy trying to explain to them he wanted to do things his way that he barely had time to train. When they started calling him during his ‘rest days’ asking why he wasn’t there he decided it was time to switch gym.

I sure hope that story won’t repeat itself. Today I'm going in again.
Posted by Jonna Wibelius at 7:22 AM

which gym did u go