Being scared of the wrong (or maybe right?) things 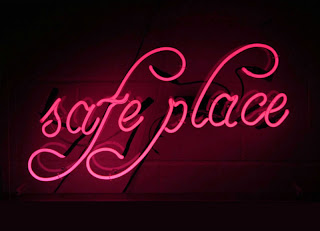 I don't know when, how or why this started, but lately I have found that I am scared of the most tedious little things, including: bugs (especially bees, and big, unidentified things that make those 'bzzzzz' noises -loads of those in China!), heights (like, being on the balcony on the 37th floor of someone's flat... I get scared I am going to fall down... which is not likely to happen but still!), not having enough money on my credit card and therefore making a scene in a supermarket (I guess I have taken to the Chinese fear of 'losing face') etc etc etc... You get the point, right?? Why on earth am I scared of things that are not going to harm me physically? (unless someone in facts pushed me of the edge of a balcony on the 37th floor..) I am never scared of those, 'other' things that most of my friends back home fear, including: walking home alone late at night, taking a cab alone (u never know if the taxi driver is a phony one), walking through dingy neighbourhoods.... and so on. I guess Shanghai/Suzhou are quite safe places. Actually, VERY safe places if u compare with many cities in Europe (I have heard, however, that some other Chinese cities, like Guangzhou, are not as safe). U rarely hear about people being robbed/stabbed/attacked/raped in Shanghai. Being such a huge city, I think it is kind of strange (but wonderful) that it is still such safe place.

During my 2 years in China there have only been a 'situation' once (which wouldn't even have been a situation unless some guy would have been eager to 'get some').
Once, during a late night (or early morning?) on Nanjing Lu, I was trying to get a cab in the rain when one stubborn beggar decided he wanted cash from me. He started to follow me and when I went up some stair towards a department store and when he followed I got annoyed, especially since he pushed me into a corner and waved his hat to me, indicating for me to put money in it although I kept saying 'no no no!'. Then, out of the blue, a (western) guy appeared and tried to hush the beggar away, pretending to be my boyfriend (totally unnecessary, but I guess it was that time of the night where some guys are willing to do some sacrifices to get laid?) and started a minor scene since the beggar at first refused to leave. The guy pretending to be my boyfriend had obviously had one too many and started being a bit abusive to the beggar, so I decided it was time to take a hike and walked the other way. When the guy noticed this, he came after me, and tried (very eagerly) to convince me to go home with him now when he had 'saved me.' Geeez! This guy was much scarier than the beggar! I have never been happier in my life to see a cab with a green light.

Anyways, this is obviously more a fun story to share than a 'situation' so maybe u get my point: I'd say it's quite safe to live over here! I guess you are better off watching out for being 'scammed' (the famous 'come and have tea with us'-scam or the 'we are art student from Beijing'-scam being the most popular I believe?) than worrying about walking home alone late at night. Or? Am I wrong? Any people living in China experiencing their city as more unsafe?
Posted by Jonna Wibelius at 5:22 AM

Modern "heroes" do not save people's life for nothing. They also want a "just" reward for risking their lives. The era of Clark Kent/Superman is long gone!

Welcome to China, the safest country in the world. The communist government is the biggest mafia, and we all under his protection.

Wow, Don't sweat the small stuff Jona! I wouldn't feel too bad about it. Most of my friends/family back home would never even think about traveling to China let alone live here...the bad Chinese Govm't may lock them up and hold them captive. If they escape the wrath of the govm't, they surely will contract one of a hundred dreadful diseases prior to going home and die a slow miserable death.
Now, if they were afraid of getting hit by a scooter, I could understand;-)