Getting used to morning runs (so far -painful!) 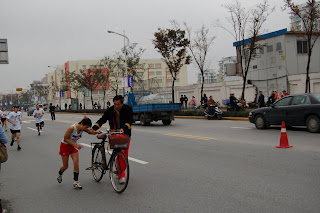 I don't want to look like this on the race day...

In order to prepare as well as possible for the Shanghai half marathon in the end of November, I've realised that I have to start moving my daily, afternoon/evening runs to early mornings. All races that I know of in China takes place early in the morning, and Shanghai marathon is no exception. If I don't remember things wrong I think the Shanghai marathon started at 7am or 7.30am in 2006 (when I last ran). That year I hadn't prepared to well, and even though I got up at 4am on the race day to give myself time to have, and digest, my breakfast, I still got a stitch five minutes after I started running. Awful! I hate running with a stitch! (who doesn't?!)

Anyways, so today, I got up quite early and headed out on an empty stomach. Now, a thing about me and mornings and breakfasts: I LOVE BREAKFAST! It's my fave meal of the day, and from the moment I wake up I am always more or less starving, and always hurry into the kitchen to prepare my favorite feast of the day. So, waking up, and putting on running shoes and shorts rather than the coffee maker, was kind of strange itself. Going out for a run on an empty, rumbling stomach, was even more strange! All I could think about was food! And try hitting a hill with weak legs? Not enjoyable.

Still, I will continue doing this morning run until my body gets used to it (I figured it will take 1-2 painful and hungry weeks?) because I don't want to be slowed down at race time because of a stitch. At the moment I am doing quite short distances (I just want the legs to get used to things slowly) so I don't see any point eating anything beforehand, but I suppose eventually I will have to start feasting on those pre-run snacks that runners of the 'Runner's World' forum recommend, including spoon fulls of peanut butter, almond butter or half a banana. Hm... none of these snacks sounds tempting at the moment (those butters actually sounds sickening sweet and as for the banana -I've never been a fan. I find the texture a bit strange?!) but hopefully I'll adjust to them eventually. Main thing is to learn how to run on an half empty stomach (I simply won't be able to eat too much on the morning of the race day -it just results in a stitch for me) and, to get used to running with the early birds.

I can't say I am excited. But at the same time. Not everything in life can be exciting. Gosh. That sounds a bit sad though!
Posted by Jonna Wibelius at 3:06 AM

If you don't like the texture of bananas (I don't either.) try drinking them with milk. Banana(s)+milk+blender=amazing. I just got back from a vacation in Costa Rica, and fruit+milk drinks are a basic part of almost every meal down there. Citrusy fruits like apples or pineapples taste better mixed with water than with milk.

It's weird how simple combinations like that make so much sense after you see it, but never really occur to you beforehand.