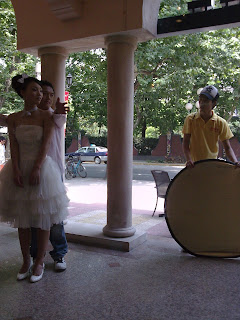 Another coffee loving couple? Well, at least they were shooting longing glares at my latte while I watched them (though the window) striking pose after pose.

Hengshan Lu in Shanghai. There must be something about it. I am not exaggerating now, but during the last 6 months, every, single time when I have walked on that road, there have been Chinese couple shooting their wedding pix outside Starbucks?! I know that Hengshan Lu is quite beautiful, but why Starbucks? Who wants to associate their wedding with huge, commercial cups of coffee?

Another funny thing about those wedding shoots... is it only me or do both the groom and the bride sometimes look exhausted, frustrated, bored and purely miserable?! As if they were on a trip to hell? And then a moment later the photographer says something and their faces break into forced, but believable smiles? Why bother with that wedding album (that for most young Chinese is a 'must have') if it's such a pain? From what I've heard it's quite expensive too?

And why on earth do it outside Starbucks?!!!!
Posted by Jonna Wibelius at 9:15 PM

That's not the groom behind the bride is it?!? He's wearing jeans and sneakers!!

he sure is!!!!!! Him in sneakers and jeans... and she in a fancy white thing, heels and tonnes of make up?! I wonder who takes it the most serious...

I've only been living in Shanghai for the last two weeks, but since I go to school in Henshan Lu I see a lot of bridal cuples whenever I get off early. Me and a friend was eating in a japanese restaurant next to starbucks, and to my suprise - there were two cuples taking pictures nearby. I'm so going to take a photo og it next time I see something like that.