Why settle for one when you can have three?! 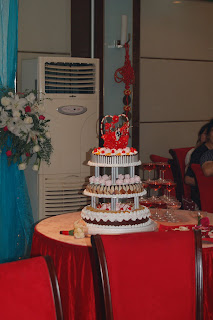 No, it's actually not the cake I am talking about this time... Althought three of that would be great too!

I just watched the 'Sex and the City' movie, so it's kind of impossible to think about anything else but 'getting married' right now. I have personally never been big on the idea of a wedding, one of the main reasons is that I cannot see myself wearing anything that makes me look like a white, giant pastry. Over the years, however, it has become more and more common that brides choose something less 'fluffy' and more 'modern/feminine/sexy' as their wedding dress, some brides even playing with colour combinations, and this has possible changed my opinion a little bit, even though I am far from that sort of girl who dreams of a 'big fat wedding' ..

It wasn't until I attended a Chinese wedding, however, that the thought of getting married became real. No, it wasn't the tacky soap bubbles or the mixed stage performance throughout the night that convinced me, but rather the fact that a Chinese bride changes dress THREE times during the wedding!!!!!!!?! Now, how cool is that?! It's like u have 3 favorite dresses -and u can wear them all on your big night?! And they can be colourful (red or yellow being popular choices in China), AND tight/flattering....?! Sounds too good to be true?! Well, it is. Because despite the fact that you, as a bride, during a wedding in China can change clothes up to three times (I've heard that some brides changes even more times, but I've never personally seen it), they also have to be involved in a lot of silly wedding games, such as smoking shit loads of cigarettes (why? Doesn't really benefit a healthy start of the marriage...) and drop by every single table to have a cheers with all of your guests (and at Chinese weddings, there tend to be A LOT of guests!). Well, the cheers bit I don't mind, but in China, cheers is 'gan bei' meaning: bottom up! And there's no way you can be a chicken and just take a sip.

Having said this, however, I suppose I should add that there's an easy way out of it too...Because most Chinese girls are no fans of booze, and most of them wouldn't be able to handle 20 + glasses of wine anyways, so in order not to be rude they either mix their drink with coke, or, the simply replace it with sprite or some other soft drink... Hm.. sprite on my wedding? I don't think so! But being able to wear 3 dresses during one night (without anyone thinking you are a freak!).... aooch. It's a tricky one.

Oh, and no no no... I suppose I should add that I am NOT planning on getting married or anything (not even close...!!!) I just can't help being a little bit inspired after watching Carrie wearing Vera Wang. Kind of impossible not to. 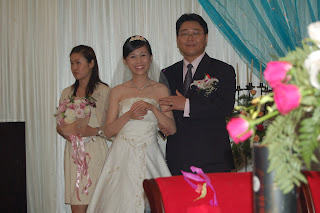 One -white and fluffy (I would go for something less 'I am a giant cup cake' like...) 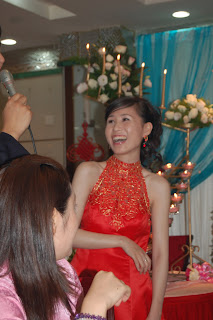 Two -tight and chic -me love! 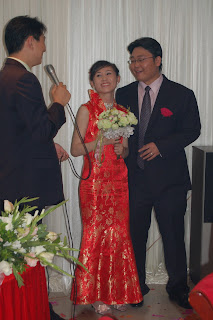 Posted by Jonna Wibelius at 2:55 AM