Yesterday at the gym I started talking to Rock(y), alias ’the Hunan boy’ and we kept talking all the way through my work out?! One hour on the treadmill have never passed any faster! I was so focussed on my Chinese that I completely forgot I was working out at the same time (not at a mega fast pace, but still). Nice!

Anyways, things got a bit clearer now between me and Rocky, and those of you who thinks that HE thinks I fancy him, can now relax, coz yesterday we talked about that and he pointed out that he ‘understands that I am not into him and that he is not into me but just want us to be friends.’ Excellent! So friends it is.

I expressed my concerned for the fact that it is kind of hard to make Chinese male friends here because if I talk to a guy that I find interesting, and then suggests us to meet for a coffee some day, he thinks I am into him and might be a bit scared (giant, blonde woman… -who wouldn’t be scared?!). Rocky said he understood and promised that he won’t take it the wrong way if we meet for a coffee and a chat. Even more excellent!

He also pointed out that I really need to practice speaking more with Chinese people because my level of Chinese right now is equivalent to a Chinese kid’s language level. He said this with a smirk, and although I rolled my eyes back to him I couldn’t help but feeling a sting of happiness. I mean, I can speak like a Chinese kid!!! Now that was something I couldn’t do 5 months ago. Now I just have to ‘grow up’ fast and things will be great.

(Note to self: Hm… maybe I should hang out more at the playground with kids that are on the same language level as me. Just to... you know, boost the confidence for a bit?)

One thing I noticed when we talked yesterday is that after the first, hesitant 15 minutes of painfully broken conversation, it got easier. Both to understand what he says and to reply/express things. So that’s good. There is hope.

After chatting for a while Rocky switched to his local, Hunan dialect (I am not sure what this one is called, but I am pretty sure it isn’t ‘Hunan hua’ so I am not even going to guess!) and I understood about 50% less than before. Still, however, I have to say that his local dialect was easier to understand than the Suzhou/Shanghai hua… It’s interesting this thing with Chinese dialects. Meanwhile people from Beijing (speaking the national ‘pu tong hua’) are the ones I understand the best (unless they speak in 120km/h), the Shanghai/Suzhou hua is the one I barely understand at all. Does anyone have any different experience with dialects? Which one do you find the easiest/hardest to understand?

Ps. Since Rocky is so kind helping me with my Chinese I am going to start teaching him English, starting from September. He knows a little bit, self taught, but he says he lacks vocabulary to make sentences. So yesterday I started off my teaching him that ‘country’ and ‘province’ are not the same. So now, instead of saying ‘My country is Hunan’ he says ‘I come from Hunan province.’ Great start! 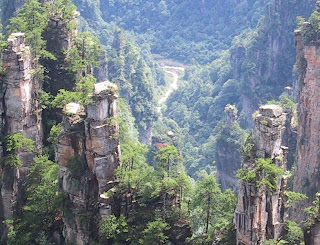 Oh, and I am SO going to visit Hunan this fall! The more I hear about it, the more I want to go!
Posted by Jonna Wibelius at 7:28 AM

Undoubtedly, Cantonese, Minnan hua (also often called Taiwanese, but in fact it derived in Fujian Province and even now there are more "Taiwanese" speaking population in Fujian than in Taiwan) and many other southern chinese dialects are the hardest. The difference between these dialects and Mandarin is just like that between German and English.

Seriously I doubt the Hunan pictures you posted are actually pictures of Yunan province..

Generally dialects from northen china is similar to Madarin, those from southern china can be completely different languages