When a man hurts himself... 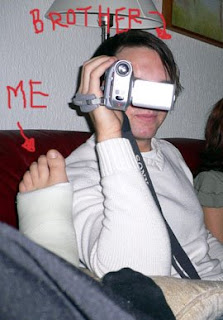 This weekend me and my bf went to Chamate, a popular tea/dim sum chain to have some refreshing drinks. The café in Suzhou was, as usual, very busy, but the waiter managed to squeeze us in and found us a table in the middle of the restaurant. Only problem: the table was that kind of table where u sit in a little ‘box’ with a low table and an even lower space for your legs. I had severe problems getting in with my legs, which my bf, as always, found hilarious. Anyways, once we had sat down, ordered, and finished our drinks I was going to go to the toilet, and since I barely got out from my seat I ended up entertaining my bf even more. When I came back we decided to leave, and guess what happened then? My bf got stuck with his left feet and ended up falling all over the floor!

I couldn’t help it, I just laughed, like an evil, unsupportive girlfriend. Oh well. Getting stuck with your feet under a low table and falling on a restaurant floor is definitely MY thing to do, rather than his, so I figured I should treasure this rare moment of him being the clumsy one.

The best bit, however, was later that night when we were home watching TV and he started to complain about pain in his foot. Him complaining about pain is a very rare matter itself, seeing that he is a typical male who doesn’t like to talk about how he feels (and, on top of that he is Finnish, and most Finns don’t like to talk at all)

Geeez. I have twisted and sprained many ankles during my life, and on top of that, I even broke my left foot in Dec 2005. Reminding him of that, however, made no difference. As the night went on, he kept telling himself (and me) that it was probably broken. Yesterday he went out and bough himself bandage and it wouldn’t surprise me if he sneaks out to visit the doctor at his lunch today.

A side note: some weeks ago at the gym I was jumping double jumps with my skipping rope together with one of the trainers (no, we weren’t jumping together, he was cheering on me and I was jumping). Obviously, double jumps are not my thing, because I landed wrong and hurt my post-broken foot. It hurt like hell and for the next week or so it was a swollen story, and I could barely ride my bike. When I complained about pain to my bf, his response was:

Now, why can’t he take the same advice from me?!
Is it always so serious when a man hurts himself?
Posted by Jonna Wibelius at 8:42 AM