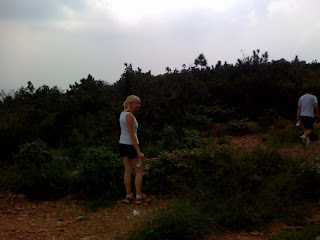 Although I made a promise to myself not to run for at least 5 days (since I have stitches on my belly from the birthmark removal) I had to break it, when the Shanghai Hash House Harriers teamed up with Suzhou Hash House Harriers (Meaning: 7 Finnish men and Me) for a trail run in the hills of Taihu Lake.

I have never been to a HHH run before, so being a 'virgin HHH' (as they so nicely put it) I had no idea what to expect.

Does all of you know what the HHH is? Hm... well how do I describe it? They call themselves 'drinkers with a running problem.' On their world homepage it says:

Now with 1872 hash groups registered in the world directory located in almost every major city in the world and 178 countries, it is easier than ever for you to find fun, trail, and friendship where you live. The Hash House Harriers is a more social version of Hare and Hounds, where you join the pack of hounds (runners) to chase down the trail set by the hare or hares (other runners), then gather together for a bit of social activity known as the On In or Down Down with refreshment, humor, song and sometimes a feast.

What this basically means is: 2 guys are 'hares'. They run 15 minutes before the other group starts, and mark the trail. They also put out false marks, in order to confuse you and have u getting lost. So it's not simply a run, it is more like a 'finding the trail run', and for ambitious trail-lookers (Or FRB -'front running bastards' as they are called in the HHH world) this can mean running in the wrong direction for 2 km, only to have to turn back when other find out that the trail is actually supposed to go the other way.

The trail is marked by signs called 'flour'... simply because it is... a pile of baking flour! And therefore quite easy to spot and find. They also draw check points (circles) and fake check points (3 lines) to have u confused. Once you hit a check point, of a 'flour' point, you should shout 'ON ON' as a sign to the runners behind you that you are on the right track.

Sounds silly? Well trust me, when I first heard it all I was like 'For real?!' but once we started running I understood it all much better. Runners get lost all the time and the shouting of 'on on!' to signal that u r on the right trail, is more or less crucial, not the least for slow runners.

There is a choice of a long run (about 10km but in hilly conditions so it feels like... 15 km) and a short run (about 6km and not as hilly). Some people simply walk the short trail and although I had planned to do the same, I couldn't help myself from running the long run once I was out there... It was simply too tempting! :)

The weather was humid and hot when we started off at 2pm at a hill next to Taihu Lake. After only 10 minutes of running/hiking/climbing up a huge hill, we were all soaking wet of sweat.. that's when I decided that I might as well run it, since I was already sweating so much... anyways, and on it went.

Like I said, since this was my first HHH run I had no idea to expect.... but honestly.. it was really a lot of great fun! Well, first of all, the running part -I LOVED, And running in the nature and through small Chinese country villages made the experience even better! Forget about cars and roads and running on concrete.... finally I got a taste of nature. Wonderful! 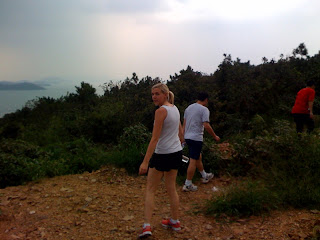 10 min into the run and already soaked... 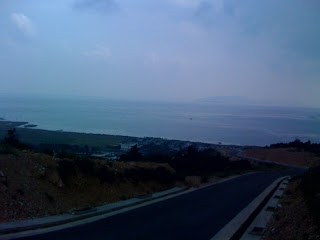 View from the (killer) hill. (and no, we were not running on the roads...) 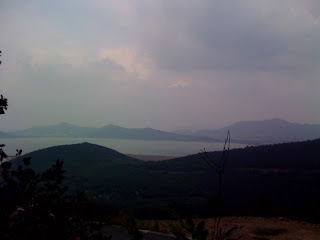 View from the hill

Me and my bf did a quite good effort seeing this was our first run. Around 2km from the goal there was a sign on the road saying 'beers are straight ahead'. This sign made all the FRB speed as if there was no tomorrow... and because of their excitement they all missed the marked right turn and ran an extra 4 km and ended up getting real lost. We were a bit behind the FRB but saw the sign, and ended up in the 'top 10' of people who'd finished the race. Not that this matters in any way... it's not a competition, but a fun run, but it was still nice to finish in the top (especially when u are competative like me) I think it took us around 1.5 hours to finish, and we finished even before the people who took the short run! Like I said: hilly conditions!!! A lot of climbing involved, both up and down (at some places u had to use your hands in order not to fall. Yes baby, we are talking real steep!) 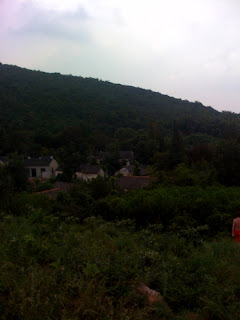 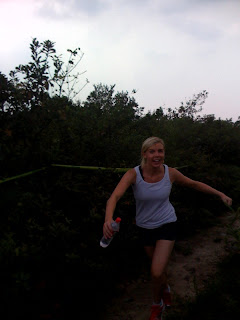 Hill running -not a 'pretty' sport...

Once everyone reached the end point there were 2 big eskys full of beers and water waiting for us and then followed the 'down down' ceremony... which is basically a time when u make fun of/humiliate everyone who has said or done something funny during the run. This might not sound like fun but it was actually quite hilarious. Three American guys were in charge of several speeches and called up people to the 'stage' where they were rewarded or penalised (both with a glass of beer) for various deeds. I was called up for 3 different reasons: 1. Being a Suzhou HHH, 2. Being a HHH virgin and 3. Having a Chinese character tattoo on my angle (this is another story, I will write more about this some other time but NO, I did not do this tattoo in China but when I was 16 and 'rebelious' and YES, I regret it very much!).

The ceremony also included 'baptizing' 2 new HHH as they had successfully participated in their second run. HHR all have silly names like 'No Balls' 'Bionic Bimbo' and 'King Piss' (yeah I know, ridiculous, I didn't come up with them). The new runners (2 Finns) were named 'Siemens Belly' (for his somewhat 'Buddha'-like belly) and 'Happy Finish'. The ceremony involved a lot of beers and some mud and is nothing I ever wish to be involved in...

After the 'down down' ceremony we were served dinner at a nearby restaurant. Then the Suzhou HHH took a mini bus back to Suzhou where we continued partying all nite long... If you like running and don't mind making fun of yourself I strongly recommend you to participate in a HHH-run. I know I will do it again! Also, I guess this is as close as u can get to a 'runner's club' in Suzhou. 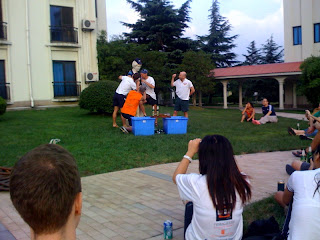 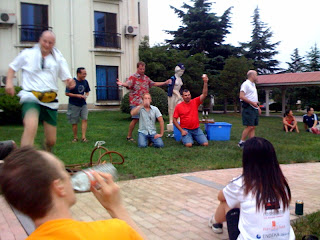 My parents used to bring me along to Hash runs when I was younger.
The ones I went on they used paper shreddings instead of flour.
To be honest I used to think the drinking ceremonies were a bit lame, but then again I was a grumpy teenager so maybe that had something to do with it!
Maybe if I did it now I probably might enjoy it, it also seems like a great way to meet new people.
By the way, you look absolutely stunning in the photos!

Little tiger -thanks for the nice comment :) (Not sure if I agree though... I was one soaked and quite muddy vision when I hit the finish line..)

Yeah I think the Hash run was a great way to meet some new people... and the drinking session was OK. U should try it again, at least if you are in China. Groups here seems to be a great mix of people, ages, and running abilities... :)

This actually sounds like fun to me. I wouldn't want to be a HHH runner forever, but it will definitely adds some fun to my memories. I have never been in a HHH running club before. Somewhat my understanding of it was so way off. I have read it somewhere before about HHH. I am embarrassed to say I thought it was a bunch of horny runners who would get naked at the destination, drinking, howling at the moon and have a debauchery for the night. I swear I have read it before about an HHH group in Southeast Asia, started by some Brits, that did what I just described. So glad you clarified the name for the HHH.

It IS loads of fun! At least the running part... loved the trail run and the whole 'looking for next flour mark' bit.. The drinking part is also quite fun.. I mean, everyone decides for themselves how much they want to drink, so it's not simply a piss-up, but more like a run with a party ending :)