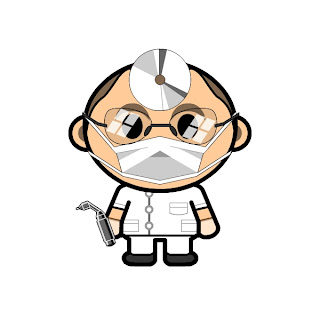 Must do when you visit China (Shanghai): go to the dentist! Waaaaay cheaper than back home (at least if home is Scandinavia -but I believe dental care is expensive in most countries).

I had a bit of an emergency last fall when the screws from a chin operation that I had 13 years ago (??!!! yeah -don't ask!) started to give uncomfortable complications and after 3 days of suffering I decided to visit a dentist. It wasn't without being suspicious. My mom is a dentist and she has always been the one in charge of my teeth, so I'm not that comfortable with having strangers poking around in my mouth... But at this time, I was in so much pain I simply had to go and get things checked.

After googling around I decided to visit Kowa Dental at the Jin Mao Tower in Pudong, and I have to say I was positively surprised by the service I got there.

For starters, I got immediate treatment. I called and got an appointment the very same day. I went there with a lot of pain but no clue what was wrong, and since they couldn't see anything at first they took an x-ray. The x-ray showed a big infection in the root of a tooth (caused by screws that I have in my chin from a former operation. Long story. Nothing interesting. But anyways, those screws were pressuring the root so badly they were causing the infection) and the dentist suggested an urgent root canal filling/treatment (or whatever they r called) because if the infection would spread it could be quite damaging.

I was in so much pain I was ready to agree to anything, and when I said 'OK, when can we schedule it for?' she said: 'I'll do it straight away?' Straight away? As in, NOW?! Yes, she meant now. But first she showed me the price of the treatment: 1000 kuai, including the check up and three cleanings. It was a go.

The filling was painful but still smooth, the dentist (and her TWO nurses... they were not saving on staff at this place) were very kind and gentle. When they finished, the dentist gave me her home number when I left and told me to call her if I experienced any more pain. I did just that and decided to call her a bit later the same day. But first I called my mom and told her about the whole thing (her being a dentist I felt she has the right to know...). When I told about the immediate treatment and the price for the root canal filling mom almost started laughing.

-1000 kuai, for the treatment? It cannot be possible? Are they real dentists?
-They are! I assured (with very high tech equipment as well!)
-In Sweden it would have cost you at least 4000 kuai. At least. And you would have had to wait for maybe 1-2 weeks before someone would be able to schedule you in.
-I know.

Turns out, it was good I was in China and not in Sweden at this painful time. Since the pain didn't subside the dentist asked me to come back the next morning and she took new x-rays. The infection (a big, black spot on the x-ray -looked kinda scary) had already spread and they suggested I'd do a second root canal treatment (on the neighbour tooth) and come back the next day.

-If the infection doesn't calm down we might have to operate you in order to clean it out' she said.
-Do the root canal filling!!!!! I yelled.

Thank lord then, because the infection didn't spread any further and I didn't have to do any operation or any more fillings. After the second filling I went back to do the additional cleanings before she eventually filled both roots. No pain came back and I was pretty relieved.

And the best bit? Total price of this all: 2300 kuai, including some antibiotics and a big, final cleaning session.

Yes people, it was very professional. Very well done. And no pain has returned. I got the dentist to email all the x-rays to my mom, who obviously contacted the surgeon and asked him how this could be possible (turns out -it normally isn't possible. The surgeon says I am a 'one of a kind' case -funny, coz I've always wondered what it is like to be one of those but now when I am it turns out it is not fun but rather annoying and unlucky- and that him and his surgeon mates wants to meet me when I return to Sweden this summer to study how it could possible happen), and both mom and the surgeon were impressed with the dentist's work.

So, if you are suffering from tooth ache, or need to get something polished, cleaned or filled? I'd say: do it here!
Posted by Jonna Wibelius at 3:30 AM

Thanks for the tip! I'll be definitely visiting Kowa Dental next month as I have a broken molar and I'm looking at a 6800rmb bill here in Canada.

Hello.
I have seen your Blog... It’s too informative. There are many posts which are really too Good and really useful specially this one.
Keep it up.

Thanks for sharing your dental experience in Shanghai. Many people may find this post useful if they are looking for low cost dental care overseas.

Hi! Just stumbled upon your blog while researching for an article I'm writing on dental care in China! I'm a student in Los Angeles, California, USA and I attend the University of Southern California. I was wondering if I could conduct a phone interview with you concerning your experience with dental care in China? It's also great that you come from a family that is knowledgeable about dental care!

My email is annieguo@usc.edu. Please let me know what you think!
Thank you!
Annie