The fight for our deposit 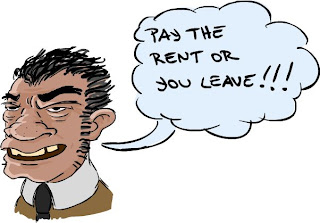 Yeah -if it was only THAT easy?!

Landlords -love them or hate them. When talking to people about their renting experience in Shanghai, you get enough material to write a book. Meanwhile most people (or expats I should say) find the ''moving in and negotiating the price' process quite pleasant, the moving out experience, including trying to get your deposit back, often is dreadful.

Take our last landlord for instance. In the beginning everything was sugar sweet. She was keen on having us in the flat, and during the negotiation process we managed to lower the rent a couple of hundred kuais, get a lower deposit (she wanted two months of rent -8000 kaui- as deposit but we only agreed to pay 4000 -thank lord for that!), plus get some new things for the flat, like a micro wave, a new washing machine, and so on. She seemed cool and easy going and so were we, so things went well.

After one year of living there we decided to extend our contract for another 6 months and our landlord was over the moon. She even lowered the rent to 2000 kuai during the first of the new six months, and once again renewed the washing machine (turned out -the cheap version she'd chosen one year ago was already giving us problems). Everyone was happy and things went smooth.

Two months before the new lease was up we had decided that I was going to move to Suzhou, so we told our landlord that we wouldn't be interested in a new lease. Her friendly tone instantly changed into a frosty, and somewhat annoyed voice, asking us to keep the flat clean and shining for the next two months so that she could start showing it to people. Since we already had our flat in Suzhou we offered to move out 2 weeks earlier than our lease expired, just to be nice. We cleaned our flat very well and to be honest, we had been taking care of it well too... only thing broken was one window handler and then we had lost a small piece of paper which had the code you need to establish an Internet connection (via China mobile). We told her this and she seemed very annoyed, and told us we should be ready to pay up to obtain a new code. We found this a bit funny. Seeing it was an ongoing Internet contract, shouldn't you then be able to obtain your code simply by calling China Mobile and telling them your customer number? According to our friends: yes. According to our landlord: No. Absolutely not. She said she had to have 2 people from China Mobile to COME TO THE FLAT (!) on order to obtain a new password. We refused to agree to pay for this, saying that we could call China Mobile ourselves, and eventually she stopped mentioning the whole thing.

Two weeks after moving out we got an email telling us we'd get our deposit once she had received the last bills from us living there. No probs.

Three weeks followed and we decided to check in what was going on by sending her an email.
The response that came was very to the point. She had added up all our bills and then came some lines of complaint:

Damages in the flat included (according to her): scratches on furniture, walls and floor and the broken window handler. On top of that, she wanted compensation for some things that were missing, including: the Internet password, a kettle (which we had never used, and therefore placed in a cupboard above the stove), plus (hear this out!): MANUALS to the micro wave and the FRIDGE! (!).

"If you want to buy these things I am sure we can negotiate a good price!" she added at the end.

Buy the password to an Internet connection? Buy a 2-kuai-kettle that she cannot find because she hasn't been looking? BUY the instruction book to the FRIDGE!?! (a book that was most likely to be in Chinese and which we had never even seen?!)

We responded quite short that we had not lost anything except for the internet password, and that the 'scratches on walls and floors' that she claimed was 'damages' was in fact marks of living and that most of them had been there before we moved in. Besides... when u rent a flat, u are supposed to use it, right? That's why you pay rent? We also added that we obviously hadn't taken any manuals with us, and told her where the kettle could be found.

The next email was aggressive. Here she accused us for being extremely rude and that she had thought we were decent people, but that we, via the previous email, had proved her wrong. She said it was a tremendous hassle for her just to obtain the new internet password and that we should show some more understanding. UNDERSTANDING!? for what? Just give us our money for crying out loud?!

Some more angry emails (from her -which we didn't respond to) about what bad tenants we had been followed (quite insane... only 6 months earlier she had praised us for being the best tenants ever, especially since we then had paid her 6 months of rent upfront). We talked to my bf's company and they said the case was very common and that most landlords are willing to go through fire in order not to pay the deposit back to their tenants. My bf's company offered their lawyer to us, but fortunately we never had to use her, because suddenly our landlord paid us the money she owed. We still don't know why, but we weren't that keen to question her decision, but simply decided to erase her contact details from our emails/mobile phones a.s.a.p. In the end, she only deducted the money we owed her for our final bills and the repairing of the window handle (a total of 15 kuai) and that's it. nothing for the 'missing password' or some lost manuals -thank lord!!

Anyways, I know that this is a 'sunshine story' compared to what some people have to go through in order to get their deposit back. Only advice I can give is: be persistent, don't be scared to use a lawyer (some of our other friends did -and won their money back), and... when renting a flat, never agree to pay more than one months of rent as your deposit.
Posted by Jonna Wibelius at 5:46 AM

My heart started beating faster as I was reading this and I could feel myself getting angry and building up a mental image of this horrible greedy landlord. We've all been there and I think Shanghai landlords are the worst, even though I have been SO lucky and found a fairly passive one. You got off lightly as I am sure you know.

woai -I know we got off easy, and you r lucky to have an easy going landlord.. the funny thing is that ours was also very laid-back in the beginning, and we r still not sure what made her flip so in the end? maybe those missing manuals were REALLY expensive, or I don't know? Anyways, now we r renting through my bf's company, thanks lord, so we don't have to deal with any landlord, and it is not even our deposit money. I must say I feel relieved about that!

I just signed for a 4th year and she tried to increase the rent but she said if you don't want to then leave it the same as before, so of course, I said I don't want to increase it. I know many friends who have had landlords try to raise the rent SEVERAL times in the year which is shocking.

But I do have 2 months deposit and I think as the contract runs down I may slow down rental and bill payments so that if there's any problem my loss is minimised. I often don't pay for 2-3 months and she's okay with that.

I'm more worried if I move and get a much tougher landlord, then I am in trouble. You are SO lucky to have it done through your bf's employer, all the stress and worry lifted!

I just arrived in Shanghai, last week and I already found an appartment. But , now, i have to fight with my ex landlord ,. I`m very upset with his attitude, because when i got the appartment 1 year ago, i refresh and paint myself with famous brand painting in the living room and the master bedroom, because a lot of black marks were on the wall after asking my landlord to remove the 2 big and ugly wood closets in the bedrooms. Now, He asked me to share the bill and pay 1800 rmb of the painting of the 2 bedroom! ( actually the wall were a bit damage by a link of the air conditioning), that in my opinion it is not a damage that i did, but just because he bought a very cheap air conditioning!And listen that! He also told me to pay 3200 rmb for the 2 wood closet!!
So i sent him an email, and remembered him that i asked him to remove these 2 closets, it was an agremment between us , so he erased in the contract the 2 wood closet from the list of furniture.
So , why,now i have to pay 3200 rmb for 2 closets??? Because, he explained to me that he asked a company to dismantle and remove the closet and it cost to him 1000 rmb, and the cost of the closet were 5000 rmb. So it is "fair" that we should share the bill!!!!Unbelivable!I immediatly called the agent who wrote the contract that in what world we have to pay for the lanlord furniture !!! ANd everything without contract, and any invoice of course!!! I received another email from the landlord, and this time, he didn t mention at all the closets, but he said that he s continuing the redecoration of the appartment and he will send bill and invoice ( probably he got advice from the agent i called earlier), and i m sure, it will find a way that the all redecoration will cost me my whole deposit! So, i m going to sue him, because i m tired to be treated like this. If somebody can give me a lawyer name, association...thanks!

soniasam -I am sorry to hear about your bad experiences, it really sux that there are so many greedy landlords in Shanghai. If you decide to go to court I advice u to ask a Chinese friend to help you. It is hard for a 'lao wai' to win over a Chinese in a local court as the court tends to favour the local (or so a Chinese lawyer told me). I hope it works out for you.