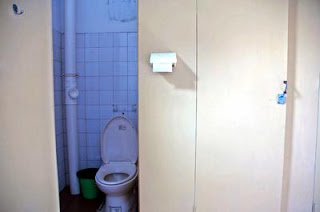 Some months ago I read an article about the toilet facilities provided during the Beijing Olympics were upsetting Westerners because most of the sporting arenas had squat- rather than western toilets. I seriously don't get it. WHO wants western toilets in a country where 1.3 billion people prefer to squat?! Who wants to sit on a toilet seat that is covered with soil? Who? And why?

Going to a public toilet (especially those in Shanghai shopping malls) as a girl is never a pleasant experience. I can only speak for the girl's loos because I haven't peeked into the men's room, so if someone (preferably a man) wants to share their experiences -please, go ahead. Anyways, back to the girl's room. It's always the same story. You walk into a toilet area full of 'really-have-to-go-girls' and start off by engaging in the 'toilet hunt' game. Forget lining up. Even if you came in last you can go first, if you are quick enough. You just have to sneak into one of the booths as soon as someone walks out of it. Let me emphasize the words: 'AS SOON AS,' because in this case, you should be very 'soon'! First one to the booth = first one to pee. Basic mathematics. Simple rules.

I used to suck at the 'toilet hunt' game but lately I have gotten much better. Especially if I really need to pee, man, then I can be I total bitch. But so many girls have 'stolen' the booth I've been waiting for before so I have stopped feeling bad about it. Only once, when I without thinking skipped the whole line at the airport in Seoul and just walked into a booth did I experience a 'what the hell am I doing?!' moment -but well, it only happened once, so I believe I can live with that. (I guess I should watch myself when I go back to Sweden this summer, though. If I don't remember things wrong you might get executed for cutting line there. No kidding).

Now, while getting into your peeing space might be easy (once you understand the game rules. And really, -new female expats in Shanghai, don't waste time on being polite!) -the actual peeing is a whole different story. Especially if it is a western toilet with a toilet seat ring.

I used to have problems with squat toilets before due to a over-stiff ankle as a result of a broken foot (which -resulted in an inability to squat!) but now the ankle has loosened up and so have I. I don't even mind simply 'hole in the ground' toilets anymore (sure they stink but I am not going into, or even touching the hole am I?). What I mind, however, is western toilets in China, because Chinese girls tend to use them as squat loos -meaning: they climb up on the toilets and squat on the toilet seat. The result: soil and pee all over the place.

I don't blame them. I have personally never tried to squat on a western toilet seat but just the thought of it makes me exhausted. Obviously not every single Chinese girl climb up and squat on a western toilet, but from what I've heard from my Chinese friends -they do refuse to touch the seat with their bum, hence the result of soil everywhere. Sure, there are many western girls leaving stains too, but in general I think the dirtiness of the female loos are a result of girls trying to squat on the toilet seat ring. The fact that I have seen several foot print on toilet seat rings is enough evidence to me.

Another thing is the flushing. I know that some squat toilets have an automatic flush function and I LOVE THIS FUNCTION. What I don't love, however, are people who simply do their dirty business and then walk out without even thinking about flushing. Seriously -we are talking about pushing a button or pulling a string here: it doesn't require that much effort! Still, so many girls don't bother. Very often it is one of those 'princess girls', dressed in pink, sky high heels and all made up who leaves it up to me to flush down her business. Gross!

I guess I could from here go onto the often over flowing paper basket next to the loo, but well, let's just stop it right here and now. Most girls know what I talk about anyways if I say that toilets in China are in desperate need of a sanitary box!

The point that I want to make is: why are they even building western toilets in China when Chinese people obviously prefer squatting toilets? Squat toilets (especially those with the automatic flush function) are often much cleaner than western toilet loos? Westerners complaining about having to squat at the toilets in Beijing during the Olympic Games should actually be grateful. They don’t know what they are ‘missing out on.’ 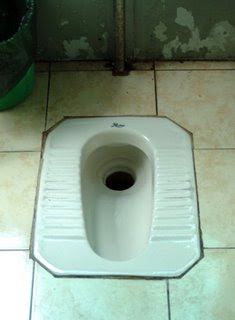 好多了！
Posted by Jonna Wibelius at 2:59 AM

According to my experiences, even in the West most people do not use western toilet without any hesitation, but they deal with it the way different to the Chinese -- instead of squating upon the seat, many people would place a lot of tissue on the seat ring before they are going to sit on it.

My toilet standards have significantly declined once coming to China to say the least...Now a nasty gas station bathroom in the US is like heaven! I will say...long pants and going to the restroom in China still makes my stomach hurl. I know you have been there (in western and Chinese toilets). Trying to keep my purse off the ground, my toilet paper from my little tissue bag in hand and desperately hiking the bottom of my pants up, all while trying to do my business. It is exhausting!
Errr...maybe that was too much information:-)

It's the same with taxis. I used to be polite and let someone take the first available one if they'd been waiting longer than me. Not anymore. It's a dog eat dog world out there. Once, a taxi stopped between me and another girl about 30 metres from both of us. I ran, she ran, I ran faster, beat her to it and as the taxi sped off, I waved and stuck my tongue out (I didn't really). But the odd part is : not an ounce of guilt because it's been done to me many times and honestly I know she also didn't think anything of it and just waited for the next chance.

The female toilet situation sounds much worse than the mens because we have urinals if we want to pee and they are exactly the same design as in the west. The biggest problem is there's usually a pool of piss by each urinal, because I guess many Chinese men aren't as "big" as they think and they stand really far back!

anonymouse 1 -yes that is true. But I still prefer people not peeing on the seat to people squatting on a seat. I guess putting paper on a seat in China is impossible though seeing as there are hardly ever any paper available in public loos.

anonymouse 2 -hahahaha... I am JUST the same! I almost want to take photos of the public toilets when I go to Scandinavia, because they are so clean, and there is always paper, some even have a nice, fresh, clean smell?! Insane!
I have to tell u thought that I have gotten much better at mastering a squat situation, I normally always have the tissue ready in a pocket or in my hand, although the placement of the handbag can be hard as there are sometimes no hooks. Whoops? Maybe TMI?

Woai -yeah, taxi lines are another, unpolite situation where u should show no fear. I don't even restrain myself from competing with little children whose parents glare at me when I beat them to the taxi.

Two years in China and I have found myself a lot more cynical than before; and I hate it.

The thing about squat toilets is that is advantageous to be expecting them when you enter the stall, otherwise you need some fancy footwork...


Besides, my knees just aren't interested in bending at the kind of angles a squat pan requires.

I still have nightmares about the toilets in China!!
If I go back to China again, I'll probably hold it till I'm back in a hotel. But that's easy for me, since I'm a guy. I feel sorry for the ladies >.<

I find it easier to take pants right of the occasion! I also hate it when the flush on a Chinese toilet is too powerful and sprays all over my shoes.

Loved your Toilet toughts, and I am looking forward to more from you on the the whole "beating the line" issue, beacause it deserves a post of its own.

We lived in Hongkong for almost 2 years and the first half year we found ourselves still standing on the train station instead of inside the train, after we waited for everyone to get out, before we entered. Or in front of the elevator. If you don't get in first, you are bound to wait for the next one. But eventually we learned to use the backpack and our broader shoulders to beat the crowd. And must admit that - after moving back to Europe - I got a lot of very angry comments, when I "forgot" to wait my turn.

Now living in the US is a even bigger cultural shock. Men are being real gentlemen and open the doors for me, let me go in before them, even in traffic they are much more polite than what I am used to.

I actually believe - though I did not love the chinese toilets at all - that if you want everything to be as they are at home, you should stay at home. Part of travelling and living in other countries is to broaden your horisont and learn to appreciate the differences. Right?

Nick -During my first months in China I actually did take my pants off at times when I went to the loo... Simply coz I couldn't squat and I didn't want to pee all over me (T.M.I??? SORRY!!). Haha. I wonder how many ppl actually does that every time they go...

Pingu -well I bet the girl's room is still a bit better than those loos u once told me about u went to as a kid.. ;)

I actually thought the hole in the grounds were disgusting when I first arrived in Shanghai, but now I actually (almost - not in nightclubs) prefer them to the western styled ones. The western toilets almost always requires you to clean up the seat after someone else, and that's far more disgusting then squatting.
And since it's only two weeks since I came to China (staying for 9 months, unless I decide to stay longer), so I guess I adapted really fast. Or maybe it just shows how icky the toilet situation can be.