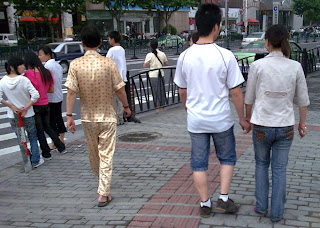 The PJ trend interests me. On Saturday I bumped into this man. He was strolling on Dongchang Lu (in Pudong) with his wife, both dressed in their fanciest bed-wear: he wore this silk creation and she (who unfortunately is covered on the photo) was in a more soft, feminine, white flannel PJ with pink hearts, which slightly revealed the edge of her underwear (not that I was looking, but… it was kind of hard not to notice!).

I was rushing to the metro. They were going shopping. (For a short while I felt like we are living in different worlds over here)

I’ve heard from some Chinese people that the PJ on the street thing is a way for Shanghai seniors (although this couple wasn’t that old!?) to show others that they are so well off that they don’t have to work anymore, and that they can walk around in their PJs all day. People have also told me that the PJs people wear on the streets are nothing they wear to bed. So basically it’s not really a PJ. It’s more like their equivalence to our western casual comfy-pants and hooded jumpers…

In the beginning of this year I interviewed Lu Kun, Shanghai’s (and maybe China’s?) most famous fashion designer (check earlier blog posts if u don’t believe me. I snapped a rather embarrassing image of the 2 of us…) and he spoke of the Shanghainese ‘PJ-street wear’ as a trend, set by the Chinese, that the rest of the world is now following with corsets and silk, night gown like dresses being a popular choice for the fashionable. Correct me if I am wrong, however, but the things u see on the streets are far from that kind of under/bed wear.

Lu Kun, however, also pointed out that the PJs are not worn to bed but simply on the street, and that PJs are perfect for Sunday leisure and summer heat. So does he, Mr Lu Kun himself, then wear a PJ outside on Sundays? Well, he actually wouldn’t answer me. But maybe I should take the smirk he gave me as a ‘yes’ or at least a ‘maybe.’
Posted by Jonna Wibelius at 7:11 AM

This was a trend a few years ago at high schools and colleges in the US. Not kidding.

You are able to fine more at the supermarkets and some living districts. Just because to many persons, it is comfortable and convenient.