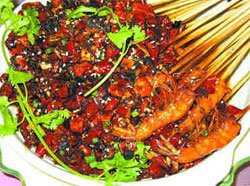 Yesterday I ate at my fave Hunan resto in Shanghai (located at Ulumuqi Lu), and as usual I ordered a seriously yummy eggplant that I've always thought was called 'la rou qie zi' This time, however, the waiter gave me a long look before she asked:
'you mean the NA rou que zi'
'No, la rou'
'Na rou'
'La rou'
'Na'
'La'

Now I am confused. It has always been called La rou before. Does that mean that all the other waiters are Hunanese and that this one was Shanghainese and therefore pronounced it 'na'...?! (If I knew the hanzi of the dish things would have been easier but I don't. I rarely look at menus when I order, instead I ask the waiter to recommend me something, and the eggplant was one of the early recommendations that I've been eating since) Or,can L, just like N, sometimes be pronounced differently and still mean the same thing? Or have I always thought I've said 'la' when the waiters have actually thought I said 'na'....?? Yeeez, can my pronunciation possibly be THAT bad?!

But hey, btw... Hunan food ....ahhhh! Isn't it just some of the best food? I cannot get enough of the chilli!
Posted by Jonna Wibelius at 6:51 AM

It should be Là, 腊肉. But the dish in your picture looks like shrimp or something.

Without doubt it's "LA rou qie zi" in Mandarin, and na surely is a dialect pronunciation for the character. Incidently there is only the word 腊肉 "la rou" in Chinese and I know no "na rou".