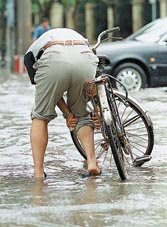 Every year around mid June the plum rain comes to Shanghai. It means 1-2 weeks of raining, not necessarily heavy, but more or less non-stop. Right now it’s quite depressing out there, but overall I don’t mind it, because the rain keeps the temperature down to a very pleasant 20-24 degrees, which is considered ‘cool’ during a Shanghainese summer (last night I even wore a long-sleeve jumper.. ahhh! Bliss!)

Anyway. Last year I obviously didn’t know about the plum rain, and neither did my British editor at the local magazine where I worked. So, after having sweated heavily during the first week of May (it was hotter last year than this) we decided that it would be perfect to do a two issue summer special, where we would list all the pools, outdoor terraces, picnic spots, and beach wear fashion in order to prepare our readers for summer.

We were a mixed editorial team: some local Shanghainese and some westerners and everyone helped with the planning, the research, the writing, the shooting and the painful proofreading. However, after two weeks of hard work the first issue was done, and it looked great!

Around the same time as our first summer issue –with a special guide to where in Shanghai you can go al fresco– hit the newsstands, it started raining. When the second issue came out, with 8 pages of bikinis/beach shorts, pool pix and air conditioner reviews, it was raining even more.

Out editor was devastated. And even more so when he one day complained out loud in our meeting room.

-This timing just sucks!! Here we are, out with a two week summer issue and it’s been raining non stop!
Then, a Shanghainese girl said:
-Well, that’s the plum rain! It comes every year at this time.
-What?! My editor repeated. Every year at this time? It always rains?
-Yes! She replied cheerfully. But don’t worry. It’ll stop in about one week.

We all starred at her. She seemed completely oblivious to the fact that 3 weeks earlier, she had been planning these two summer issues with us, without even mentioning the word ‘rain.’

One week later (as predicted by our girl), the raining stopped and the summer heat came. Our summer editions were replaced with out new, not-as-sunny editions, and the rest of the English magazine community in Shanghai released their own summer specials…
Posted by Jonna Wibelius at 6:08 AM