Do western men and women live in parellel Shanghais? 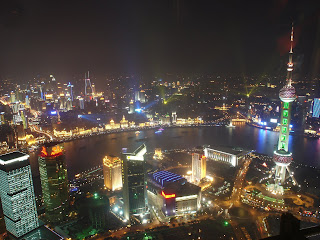 When I chat to my western male friends in Shanghai about sex and relationships I get a feeling we live in parallel Shanghais.

10 out of 10 of my male friends in Shanghai are single. And they do not want to have a relationship. Fine, you think, nothing wrong with that. And sure, there isn’t anything wrong with that. But considering the amount of women some of these guys date, I feel like they are indeed, looking for something? Why else would u devote so much time to women? Is it really so much fun to wine, dine and sleep with them? And have these men got nothing better to do but to be out there chasing lambs all night long?

Well, as one of my male friends put it (and he is far from the worse one in the bunch): “Shanghais is a city of opportunities and possibilities for single men. Here you get chances to do things that you would never get a chance to do back home. The opportunities that walk by are opportunities that might never cross your life path again.” As examples, he mentioned going home with four girls one night, or a pair of identical twins another night. No, I have to point out that HE hadn’t done either of this; it was one of his friends who had.

When he told me all this I felt as if he was fishing for some sort of understanding from me. Almost as if he was expecting me to fling my head backwards, slam my hands on the table and with a sensual smirk say: “Of course I know what you mean! You should enjoy your swim in the water!”But how can I? We western women in Shanghai are often taller than a majority of the local men, and even if we weren’t, we are often not attracted to them. (and if we would be, I bet they wouldn’t fancy us –what man wants a woman who makes him feel small? Yeah, exactly). How can this guy expect me to understand a dating jungle that I am not even allowed into? (not saying I wanna be in there, but u know what I mean?)

It’s a ‘business men thing’ to go to ‘KTVs’ at night. A business MEN thing only. Apparently Chinese business men take their western business partners/visitors to ‘KTVs’ where they can choose a girl that they either have as their host lady for the night, or, decide to sleep with. If a western woman happens to be part of the visiting group of business people, the visit to the KTV bar obviously doesn’t happen. At least that’s what another one of my friends told me. She works for a German company, and every time they are about to have visitors from Germany coming to China for a trip to, let’s say, Shenzhen, the German visitors call her and beg her to come with them.

-Why do you need me there? She asked, the first time, feeling a bit flattered.
-Well if you are there we don’t have to be rude and decline prostitutes, her (married) German colleagues replied. If you are there they won’t even offer them. Or at least we hope so!

Of course they didn’t. Western women of Shanghai aren’t part of this world. We don’t get offered sex when we walk from Jingan Temple to the French Concession. We don’t get offers here that we wouldn’t get at home (exceptions can be found I am sure) and most importantly, we don’t behave that much different here than we normally do. At least none of my single female friends is dating a new guy every night. God forbid her if she would. She’d be such a slut. And she’d probably run out of men quite soon. All of those that would be tall enough would be too busy chasing new ‘China experiences,’ or keeping themselves open and available in case a new ‘opportunity’ would walk by... 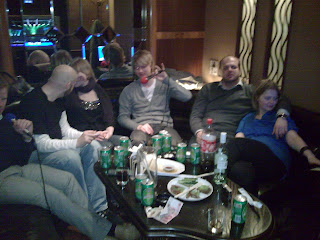 So is this only a 'woman's idea' of what a KTV bar is like?

Posted by Jonna Wibelius at 6:15 PM

I find it so weird that people keep telling me about china's height obsession and about how chinese men aren't very tall.

I'm american but i'm ethnically chinese and almost all my relatives, myself included, are tall. I'm female and in spite of my height, I'm still "slender-boned" I suppose but the point is, I come from a tall family. Weird...Either I'm from a family of mutants or in certain areas of china, there are really tall people.

Wait a minute. Where in china is Yao Min from? Hey! In fact, isn't Yao Min's wife also incredibly tall (another professional basketball player of course).

Maybe your western gal pals should go find the place where all the chinese basketball players are from. No doubt there's gotta be plenty of eligible tall guys looking for tall girls in that wonderful province that produces basketball players (I'm totally joking ^^;;)

Man...are Chinese guys really THAT unappealing to the Western eye? I mean....damn....wtf.