Shanghai half marathon 2008 -here I come? 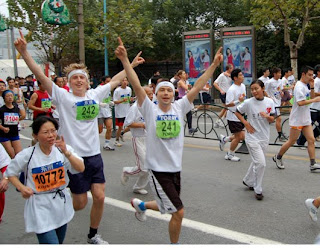 I am thinking about running the Shanghai half marathon again in November. Yeah I know, a bit heavy information on a Monday morning, but I couldn’t help but be inspired when I read about Stockholm marathon (that was yesterday) in today’s (Swedish, online) morning paper. Marathons are such fun, and besides, it’s always great to have a goal to work out for. I ran the Shanghai half marathon in 2006. It was part of my ‘great comeback’ after having broken my foot (by slipping on an ice spot, yeah I know, I am not the most gracious kind…) one year earlier. The healing of a broken ankle was much more painful than I imagined it to be, with stiffness and a pencil thin calf that refused to bulk up (it still does. Almost 3 years later my left calf is still much skinnier than the right. If you look up close I look a bit odd). But now it is almost back to normal.. I just have the odd pain in the angle every now and then, oh, and my knees are a bit sensitive too, and I’ve had some problems with one hip… but EXCEPT for that I am pretty much ready to go! Yesterday I went for a one hour run.. it wasn’t hard and I wasn’t completely exhausted afterwards. Just a little bit. So I am thinking that I really should be able to work up a good shape by the end of November 2008… But who knows. The only problem about running in China is.. well, running in China. The air, the ground, the people… (the air is too polluted, the ground is so damn hard –concrete for 2 hours is not like candy to my knees- and all the people looking at you as if you were an alien –even more so than usual?!- can sometimes get to you). Oh, and seeing that it is now heating up, I suppose starting to train for a half marathon is a quite silly idea. But maybe I can work something out. I just got so inspired when I saw pictures of all those healthy looking runners. I can’t believe I used to be one of them.

I want to be one of them again.

And come on. A half marathon is only around 21 km. Not even a full one. I should be able to do that? (I just have to hope that my angle/knees/hip feel the same way!) 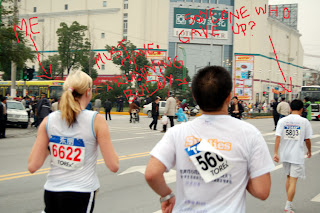 Posted by Jonna Wibelius at 7:16 AM