Behaviour out of the ordinary 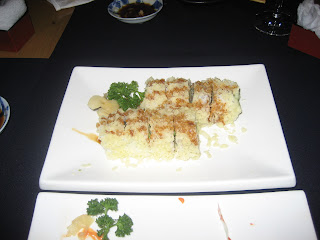 Yesterday I did something completely out of character. I complained at a restaurant. In Chinese!

Yeah, I bet most of you are rolling your eyes and thinking ‘so what?!’ but guys, I am Swedish. Swedish people rather step on burning coal than complain about their food in restos.

To make matters even more weird: I was at the restaurant with my bf. My Finnish boyfriend. Now, if Swedes would rather step on burning coal than complain, Finnish people will go through fire in order not to raise their voice. They must be the world’s most quiet people. I don’t know how many times my bf has been munching on an almost raw piece of steak although he asked for it to be well done. Sending it back and asking for them to re-do it? Never. It’s not in his system. He gets upset when I suggest it. And he rarely gets upset.

So, what triggered me to raise my voice this time then?

Well, how about being served old tuna sashimi at a Japanese restaurant?

Now, it is already expensive and the slices are tiny. So when they came in looking ol’ brown and soggy, I simply had to put my foot down. I am quite impressed I managed both to complain and to stay polite (a little bit) using my Chinese language skills. The waiter totally understood me. Something must have happened to my pronunciation? Something wonderful…

And, my bf didn’t get upset. He actually thought I did the right thing complaining. Because they exchanged out sashimi to fresh one and apologized.

Obviously we knew we’d have to pay something for being the most annoying guests of the day. And when our platter of mixed rolls and sushi arrived we sensed the message. All the pieces had been rolled in wasabi. No, not just rolled. They had been dipped in wasabi. Smeared with wasabi. The bathed in wasabi! Because the green, spicy stuff that I normally love was everywhere. And it was too much. Even for wasabi-loving me. We choked and coughed and ordered copious amounts of miso soup to stay sane.

Oh well, at least we got our fresh sashimi?

Well, now when I think of it, I suppose our miso soup tasted a bit off too…? And like my bf said when we walked out, and passed the line of fake-smiling staffs that were yelling their farewells in a mix of Japanese and Chinese: “Well you know we cannot come back here for a while.”

I won't eat raw fish in China. I cannot be sure if the fish that they used is really fresh. What do you think of the steak? Are they imported steaks? I am going to be in China this summer for a few days and would appreciate your comments on the types of foods anbd restaurants to go to.

The fish at the japanese restos is normally OK. Sometimes I buy salmon that's been imported from Norway in the western food shops, and that's also good.

About steaks -I normally don't eat them but I've heard u can find good ones in Shanghai. There are loads of western restos in Shanghai providing steaks, if they r local or not I wouldn't know, but I suppose the more fancier the place, the less risk for a bad steak. I will compile a little restaurant guide in a few days and post it on my blog... I hope it is Shanghai you are going to since it's only Shanghai eats that I know of :)