Don't give apples to sick people 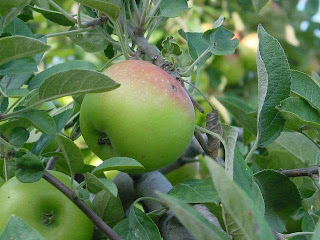 A big downside with living in Suzhou/Shanghai and studying Mandarin is that 98% of the times when I chat to locals, I understand nothing, or close to nothing of what they are saying. Therefore, any advices on how to master Suzhou or Shanghai 'hua' (which are not even the SAME?! Booooh! As if it wasn't complicated enough already?) are appreciated. Yesterday, one of my teachers who is from Wuxi, enlightened me with some manner's advice.

We were talking about being a house guest in China and about what gifts you are supposed to bring. She asked what we would bring if we went and visited someone who was sick and at the hospital, and I suggested fruits, or 水果 (shui guo). Sure, she said, this is fine, as long as you don't bring apples.
And why not apples?
Well, it's another one of those pronunciation rules... Just like the number 4 (四 si) is considered to be bad luck because it almost sounds like death (死 si), the world apple 苹果，(ping guo), said with a heavy Suzhou dialect, apparently sounds similar to 病故 (bing gu) which means 'die of illness'

So there you go. Better remember. When visiting a sick person in Suzhou, apples are off limits.
Posted by Jonna Wibelius at 5:42 AM

It is the same as that in Shanghai dialects. Another example is pear. It is better not to divide the pear and share with your lover or friends, which means "abruption or separation". It is because the similar pronunciation "Fen li"