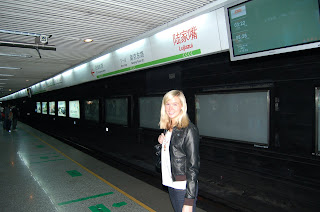 Normally the metro is the fastest way to get somewhere in Shanghai...

I almost forgot to tell u what happened the other day in the Shanghai metro. I was travelling with a very small suitcase because I was going to the train station. As usual, I was a bit tight with time, so therefore I wasn't happy when a police man/ some sort of guard tried to stop me at Changshu Lu metro station.

First they stopped another man with a suitcase. Then I heard them yell for me.

I pretended I was a clueless tourist but I suppose the fact that I started to run towards the gate that reads your metro card (or whatever those now might be called?) sort of gave me away... Just when I put my card on the magnetic field a guard caught up with me, put a firm hand on my shoulder and asked me to come with him. I reluctantly followed him, angrily mumbling 来不及，来不及，我去火车站! (meaning: I don't have time! I am going to the train station).

But the guard didn't care one bit. He told me to open my bag and then he poked through it. I suppose it wouldn't have been so bad unless it was for the fact that a minor crowd gathered around me, DEEPLY interested in what the 'lao wai' had in her bag... (My gosh. When is the novelty going to wear off?!)

After some poking he told me I could go. And angrily I went. And almost missed my train. But only almost.

Anyways, I suppose what I am trying to say is that if you are travelling by the Shanghai metro to the airport/train station with a suitcase and you're short of time... think again. You might get held up, AND have to show half of Shanghai what is in your bag. So bring a dose of time AND patience.
Posted by Jonna Wibelius at 1:06 PM

It was so sad, and actually it just happened recently after a warning of the security in public transportation, like underground or called metro and buses.

And I think it will continue before the Olymipic games.

it's an anti-terrorist security control for the coming olympicgames

Is "小姐小姐" used in Shanghai/Suzhou ? When I was in North China, most people were using some other term for "miss".