SOS -get me outta here! 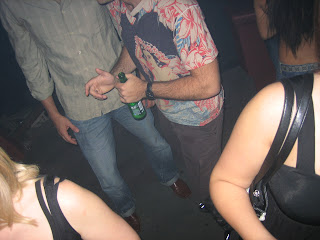 Last night out at SOS Nightclub in Suzhou was like a scene taken from a bad wild-wild west movie. The only thing that made sense throughout the night was the name of the club… My ears and eyes certainly needed some aid after two hours of loud techno music and smoke machines. Oh, and not to be forgotten: around midnight the bartenders brought out the sparklers… I haven’t held a sparkler since I was 10, so this was kind of exciting.

Around the same time as everyone lit their sparklers they also put a guy at the podium, and we almost got a bit excited until we noticed that he was 1.60 tall, and that he was wearing a white shirt that showed some of his white belly as he had tied it up in a classical 80-ies ‘show-your-stomach-knot (I am not sure if there is any other English term for this.. but u know what I mean right? Girls in Europe and America used to do this in the 80-ies. In China, some still do).

Yeah, so it was a kinda tacky scene and it did get better. Some guys ordered a bottle of scotch that the bartenders poured in a jug with ice. At one point, a guy asked for more ice and the bartender managed to crush the bottom of the jug (by filling it up with too much ice I assume. I have also managed to do this in my early days of bartending) While the expensive scotch quickly vanished from the bottom the bartenders got angry at… the guy drinking scotch. He said it was a stupid idea of him to ask for more ice. Ahh…. Classic.

The night didn’t go as wild as I predicted it to, I suppose I lost my mood somewhere in between listening to people arguing about scotch and watching the strippers, sorry, the dancers. But well, at least I’m not hangover today! That mean I might get a chance to go to the gym and have a chat with my new friend from Hunan who I find very interesting to talk to. Apparently he got to Suzhou by sitting on a train for 50 hours... Now that is a story I'd like to hear!

And as for bad nightclubs: I’ll be spending most of the next three weeks in Shanghai, working on a project and oh my, I cannot wait to visit all those pretentious bars at the Bund. 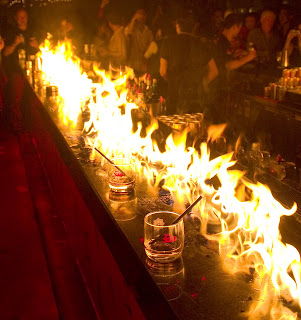 Hello, Bar Rouge (sure, putting the bar on fire is tacky too, but well.. at least there are no strippers!)
Posted by Jonna Wibelius at 9:19 AM

haha did you ever go to the club O2 in shanghai? same thing.

Strippers won't put you in the burns unit of your nearest hospital!