Dislike of the day: waiters that keep your change 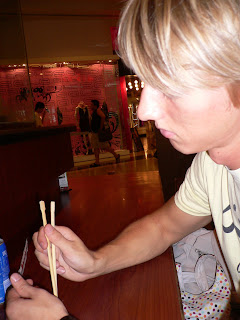 I've been getting a bit annoyed lately by waiters at restaurants keeping your change as their 'tip' without even giving you a change to decide if you want to give it or not?

Yesterday some friends from Shanghai arrived, and we went to have a late dinner at a restaurant in Suzhou. The restaurant area is very popular, especially amongst foreigners, and I bet to a lot of foreigners, leaving a 20 kuai tip makes little difference in their wallet. However, I really cannot stand when waiters don't give u a chance to choose if u want to tip them or not, and especially here in China, where there is no tip-culture (I've been a waiter myself so I know the drill -tip culture or not, u should always return the change).

When we had paid for our meal yesterday we were waiting for 20 min for our tip before we went to ask about it.
The staff looked completely confused "Have you already paid for your meal?" they asked. "Who was the waiter?!"
Well apparently the waiter had mysteriously vanished but when he came back 10 min later we went to ask about it. It was only 20 kuai but at this point we were so annoyed about him just keeping the change and not even bothering about giving it back.

Eventually he appeared at our table, with an amused smile on his face.
"Did you want your change?" he asked. "Didn't I already give it to you?"
"Eh, no!" we replied in choirs.
"Oh okey... well here u go then..." he said, and reluctantly pulled a 20 kuai note from his pocket.

Gosh, that was the last time I ate at that place. We actually also noticed later that some extra 'beers' had been added to our bill? This is a big downside with going to restos that are popular amongst foreigners. Unless you pay attention u will often be cheated.
Posted by Jonna Wibelius at 1:24 PM

Tipping is a very bad custom in the west, do not spread it in China!