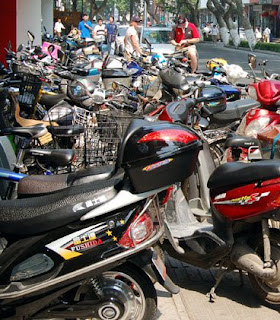 Many people complain about the service in China. I think that it can be both exceptional and terrible.

I always ride my bike to the gym and the bike parking lot is always a mess. Too many bikes at too little space. It’s close to impossible to squeeze in your bike, but I am a stubborn cookie and managed quite well until one day, when it was simply too crammed. Some people had even challenged the rules and parked their bikes OUTSIDE the assigned area (A big no-no in China) so I did the same thing.

After my work out I came down to find my bike… gone. Well at least gone from the forbidden area. I was looking at the ocean of bikes, trying to figure out if mine was in there, or, if it had been stolen, when a guard suddenly appeared.

And then he went into the bike area, fiddled around for a bit, before coming out, carrying my bike!

Now I thought this was a one off, but it has actually become a routine between me and Mr guard. Now I don’t even bother to try to find an empty spot in the bike parking lot, I simply put my bike outside the area, and let 'them' move it to some mini spot that I haven't noticed inside the area. When I come out from the gym the guard will appear and carry it out for me. The best bit? He doesn’t even seem angry, he even smiles! Take that, grumpy parking guards in Sweden! That is what I call assistance.
Posted by Jonna Wibelius at 7:19 AM