Me and Taiwanese men

There’s something about me and men from Taiwan. I generally speak of Chinese men as quite shy, at least when it comes to approaching a western woman (especially one of my height… seeing I am taller than 80% of the men down here) but Taiwanese men are definitely exceptions. Three times (!) in only 2 months have I been stopped on my way out of my local Starbucks by men from Taiwan who want to: A. Ask me to join them for a coffee. B. Chit chat. C. Do language exchange.

Well actually, two men have suggested the language exchange, but only one of them was honest about it (the other one started sending me sms:es about that he was single and felt happy he had met me? Say whaaaat?). Obviously I am a bit suspicious when someone suggests language exchange (especially if they are male and if their Eng is already quite good) but the last guy that stopped me, and that I’ve now met twice for 2.5 hours of language exchange (1 hour Chinese, 1 hour English and then 30 min mix) has been really great! During our first meeting he even assessed my Chinese level by asking me to read a paragraph in a Chinese book and then explain the meaning of the text to him (I almost managed!). Anyways, it’s really good to meet him and practice everything I learn at the uni, not to mention to practice my listening skills. The hardest bit for me right now is to hear what people that I meet on the streets are saying because they speak so fast (obviously our teachers at the uni slows down a bit for us during class) so regular chats with someone local is essential in order to improve.

Also, I am finding it really interesting to learn more about Taiwan. Apparently this summer will see some direct flights from Shanghai to Taipei (right now there are none, you have to fly via Hong Kong or Macau) and then the flight connections are said to gradually increase. Cool! I’d love to visit Taiwan at some stage. From what I’ve heard and raid it’s a quite beautiful island. 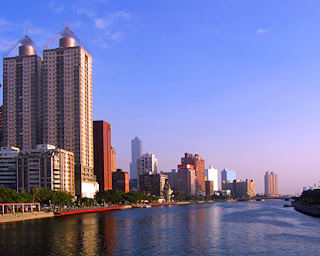 Posted by Jonna Wibelius at 7:08 AM

Taiwanese men, and not shy?!

wow, this IS new to me ;) and i've been here for almost three years..

Maybe they get a confidence booster once they come to the mainland? Or, maybe it's just a coincidence? I just find it funny that all the Chinese men that have approached me have been Taiwanese.

Maybe there's something in the coffee at Starbucks... hm...

I think Taiwanese men may be more romantic or openner... why not try to wander around Hongkong's streets and see how many men there will approach you? (BTW, such an action is called "da1shan4" 搭讪 in Chinese).

Well, what I really wanna say is: How exactly do you go along with your language exchange? I am planning to do such practice soon but I just don't know what to do. I need some tips from you.

And I'm wandering why you all the time spell "anyways" instead of "anyway". It seems a bit weired -_-!!!