How feminine can men be? 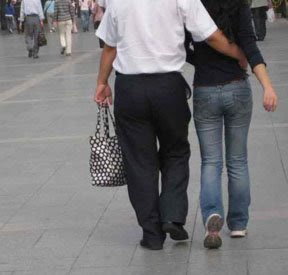 This is much more OK than plastic surgery to look feminine...

Yesterday on the train I was seated next to a young Chinese man wearing a pink shirt and carrying around a red bag. A bit fruity perhaps? But then you should have heard the ring signal on his mobile phone!

Then I read an article on CareFair.com saying that Chinese men are opting for more feminine-looking faces….The article mainly indicated that young men aged 18 to 26 (mainly Shanghainese) “are turning to plastic surgery to achieve a smaller, more feminine face. Men are requesting cosmetic surgery to look more like popular celebrities, resulting in requests for smaller noses and pointed chins.

Some of the men are turning to plastic surgery as a way to gain a competitive edge in the job market. Statistics indicate that there has been a 100% increase in men who are having some form of cosmetic procedure done.”

The Shanghainese man is already known for being a Chinese woman’s best helper, as he is willing to do both grocery shopping and house cores (something I've heard the northern Chinese man strongly opposes), and this I strongly support. Plastic surgery, however… ehum. Yikes!
Posted by Jonna Wibelius at 7:09 AM

This site is recommended in case of the Cosmetic surgery. http://cosmeticsurgery2008.blogspot.com/