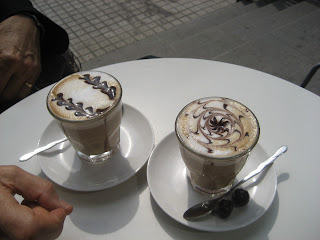 It's not like you wanna down these in 5 minutes?!

I find the service at western cafes to be highly interesting, and sometimes even amusing. Like yesterday, at Wagas.
(Note for you who don't know: Wagas is a typical western café selling pastas, paninis, wraps, salads and soups for around 50 kuai. When I first came to Shanghai Wagas was a great resort as it took some while for my belly to get used to the Chinese oil and msg, however, nowadays I rarely visit the popular chain that is pretty much always packed with westerners around lunch time).
I was eating a chicken wrap, which was in fact split up in two smaller wraps, so I took my time eating it.

When I had finished the first wrap I gave my stomach a small break. Instantly a waiter appeared and tried to snap my plate from me!
-I am not finished!, I said, and put my hand over my plate.
She rolled her eyes and walked away.
(Jeez lady, how about ASKING first?!)

So I started eating again, but this time more slowly, and constantly putting the decreasing wrap back on my plate. It didn’t take long before a new waiter appeared and grabbed my plate.
-I am not FINISHED! I said, a bit louder this time (although it wasn’t the same waiter) and grabbed the plate that she had taken from me. Give that back to me!

My friend Anna who was with me found this highly amusing. For me, however, this is how it often goes at Western cafes where the waiters are so desperate to quickly clear the tables, that they often clear some of your food or drinks too. I’ve had so many half empty smoothies, glasses of wine, plates of fries, plates with that one, final pizza slize (that you know you shouldn’t eat because you are already full, however, the chances are that you are still going to squeeze it in because it’s so yummy…) taken from me, in such speed that I haven’t even had time to protest. Also, to be frank, those times when it first happened, it felt a bit stupid to demand your plate back. I mean, there was only a liiiiiitle bit of food left and I was pretty much finished anyways…

But now my attitude has changed because it has started to annoy me so much. I want those staff to give me a chance to nibble on my own leftovers as long as I want. Or, at least ASK me if they can take my plate before they grab it and walk away. Also, the sour attitude when you tell them ‘I’m not finished’ –what is all that about?! If my lunch hour is one hour I want to take my time to eat. Not hurry out so that they can give another customer my empty seat.

Me and Anna discussed it later. We were thinking that maybe all the waiters at Wagas have a competition about who can clear the most plates? The winner gets a pay rise and a bag of muffins? Then, of course, I could understand their eagerness to do their job. If this is not the case, however –which I doubt it is- then I find the plate grabbing a bit unacceptable. Later during my lunch hour, when I actually was finished, a manager (I guess the other waiters told her that it was ‘impossible to get that girl’s plate!’) came and asked me: “have you finished, can I clear your plate?” before reaching out for it. And sure, then it’s a whole different story.
Posted by Jonna Wibelius at 8:03 AM