I take it back -I love the sunnier days! 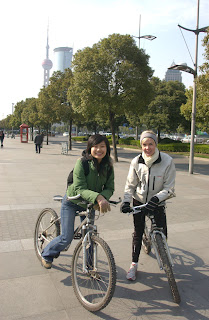 Misleading photo maybe.. this one is taken during a bike ride (for a magazine article) in Shanghai in Feb 2007... so it wasn't really warm then. But anyways, u get the point?

OK I take back what I said yesterday. I AM indeed ready for sunnier and warmer day! Yesterday I managed to convince my bf to buy himself a bike (that venture is a story of itself, however. He came back from the bike shop with something so small it’s close to a children’s bike–yeah, don’t ask why- but after some serious saddle raising it was actually okay to ride, even though he kinda looks like a fool when he does) and today we went exploring Suzhou.

I managed to get both a tan and some great views of the city that is impossible to get via car. Sure, you can explore by foot but it’s definitely easier on a bike. Obviously because it’s faster but also because on a bike saddle, it’s somehow easier to deal with noise, traffic and people in general. On bikes you’re on the same level as the Chinese. You can be completely selfish and just ride however you want (like everyone else does) and ignore pedestrians, cars and red traffic lights. It’s great. I love it. I just wish my bike had a real car honk rather than just a bell, but I guess I have to work with what I’ve got.

We rode down Shiquan Jie (Suzhou’s infamous bar street) and chose the little lane alleys rather than the main street. Those alleys eventually took us to the quite new Bookworm café, a great and well needed addition to Suzhou book lovers, which is located between Shiquan Jie and Shizi Lu. It’s basically a café/book shop where u can browse, read, shop and eat at the same time (a heaven for me!). From there we rode Wusong (I think it was called??) Lu down to the city centre Guan Qian Jie where we did some window shopping, bought some fruits and returned home. Lovely! Next time I’ll bring my camera so I can share it better with you guys.
Posted by Jonna Wibelius at 6:15 PM