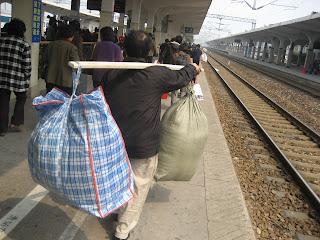 Yesterday at Suzhou train station a fat Chinese man asked if he could take my picture, as well as pose in one with me. Then followed a humiliating moment when half of the station watched his friend sloooooowly snap the shot.

What’s going on? Suddenly people are taking photos of you everywhere. Sure, the Bund or the Great Wall, but Suzhou train station?! Gimme a break!
In Shanghai the weather was steaming hot. So hot, that during the night came a thunderstorm. And what a storm then?! You ain’t seen nothing until you’ve experienced a thunderstorm in Shanghai. Fortunately I am no scared of thunder. Neither are the Chinese. When I eventually came to Shanghai Railway station to jump on the train home, the farmers were sitting outside the station under some trees, eating 3-minute noodles, laughing and playing cards.
Posted by Jonna Wibelius at 7:13 AM

For real? I've seen lots of lightning in the evening, but I must've slept through the thunderstorm. ;-) Yes, I'm blessed with a good sleep.