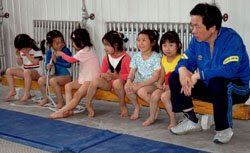 When they are small they do sports in school... but then what?

The more time I spend at the gym, the more I start to wonder… why Chinese girls seem so reluctant to sports? None of my Chinese female friends do any sort of sport. It’s not like they ‘need’ to, they all look amazing anyways (with petite body types I can only dream of!) but I still just wonder why the interest for sport in general seems to be so low?

I know that because of history Chinese people haven’t really got a chance to bother about sports and such things, but now, when the country is opening up and being exposed to (and influenced by) western standards, then why is it still regarded so odd to put on your joggers and go for a run? I mean, those times when I have been out running, I have received so many odd looks and gibes from the Chinese girls that I almost feel like turning around and screaming: “What?! Come on! I am just running! It’s not bad for you, you know?!”

I get the feeling that in China, unless u are fat, u shouldn’t do sport? Or are girls simply just not interested? Is it considered too masculine to sport?

When I am talking about girls not being interested in sports I am obviously not talking about people living on the country side, but about the city girls, the fashionable, trendy it-girls. For me sports have always been a vital part of life and although I know many people don’t enjoy sporting or sweating, I still think the general interest for body and health is bigger in for instance Europe than it is over here.

The women I meet at my gym are seldom younger than 40 and almost always overweight, which makes me think they are there because the doctor told them so. But what about the ladies in their 20ies and 30ies? Too busy too shed some pounds? Or simply not interested?
Posted by Jonna Wibelius at 10:21 AM

I confess this is not really a comment on this latest post. I am just wondering if you knew that SHE is in fact the name of a girls' band in Taiwan but also very popular in mainland China. Everytime I glance at your blog's title it just reminds me of them...hahaha:D

well, the same here: at our univ. gym i have never seen a woman yet!!!

but the rumor goes that one slightly 'healthier' (read: a chabby one) visits the gym from time to time..

Of course I know the band SHE... I have their latest album! I am not going to say I understand much of what they are singing about, but I think they have a kind of cute sound.. When I worked at a radio station in Finland we used to play a lot of Chi music during out Chinese radio programs, and the bands SHE and F.I.R were definitely my favorites! I love the song 'Lydia' :)